The undersigned is directed to convey the sanction of the President to the grant of Non-Productivity Linked Bonus (Ad-hoo Bonus) equivalent to 30 days emoluments for the accounting year 2014-15 to the Central Government employees in Groups ‘C’ and ‘D’ and all non-gazetted employees in Group ‘B’, who are not covered by any Productivity Linked Bonus Scheme. The calculation ceiling for payment of ad-hoc Bonus under these orders shall continue to be monthly emoluments of Rs. 3500/-, as hitherto. The payment of ad-hoc Bonus under these orders will also be admissible to the eligible employees of Central Para Military Forces and Armed Forces. The orders will be deemed to be extended to the employees of Union Territory Administration which follow the Central Government pattern of emoluments and are not covered by any other bonus or ex-gratia scheme.

2. The benefit will be admissible subject to the following terms and conditions:-

(i) Only those employees who were in service as on 31.3.2015 and have rendered at least six months of continuous service during the year 2014-15 will be eligible for payment under these orders. Pro-rata payment will be admissible to the eligible employees for period of continuous service during the year from six months to a full year, the eligibility period being taken in terms of number of months of service (rounded off to the nearest number of months);
(ii) The quantum of Non-PLB (ad-hoc bonus) will be worked out on the basis of average emoluments/calculation ceiling whichever is lower. To calculate Non-PLB (Ad-hoc bonus) for one day, the average emoluments in a year will be divided by 30.4 (average number of days in a month). This will thereafter be multiplied by the number of days of bonus granted. To illustrate, taking the calculation ceiling of monthly emoluments of Rs. 3500 (where actual average emoluments exceed Rs. 3500/-, Non-PLB (Ad-hoc Bonus) for thirty days would work out to Rs. 3500×30/30.4=Rs.3453.95 (rounded off to Rs.345%)
(iii) The casual labour who have worked in offices following a 6 days week for at least 240 days for each year for 3 years or more (206 days in each year for 3 years or more in the case of offices observing 5 days week), will be eligible for this Non-PLB (Ad-hoc Bonus) Payment. The amount of Non-PLB (ad-hoc bonus) payable will be (Rs.12oox30/30.4 i.e.Rs.1184.21 (rounded off to Rs.1184/). In cases where the actual emoluments fall below Rs.1200/- pm, the amount will be calculated on actual monthly emoluments.
(iv) All payments under these orders will be rounded off to the nearest rupee.
(v) The clarificatory orders issued vide this Ministry’s OM No.F.14 (10)-E. Coord/88 dated 4.10.1988, as amended from time to time, would hold good.
3. The expenditure on this account will be debitable to the respective Heads to which the pay and allowances of these employees are debited.
.
4. The expenditure to be incurred on account of Non-PLB (Ad-hoc Bonus) is to be met from within the sanctioned budget provision of concerned Ministries/Departments for the current year.

5. In so far as the persons serving in the Indian Audit and Accounts Department are concerned, these orders are issued in consultation with the Comptroller and Auditor General of India.

(Amar Nath Singh)
Deputy Secretary to the Govt. of India 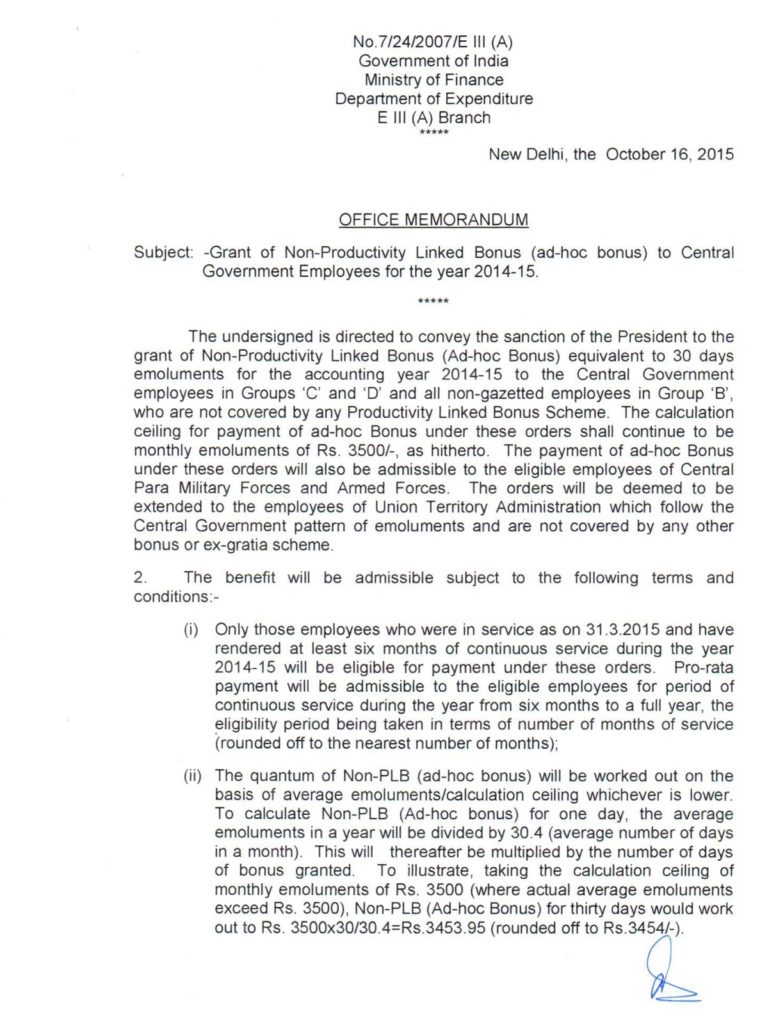 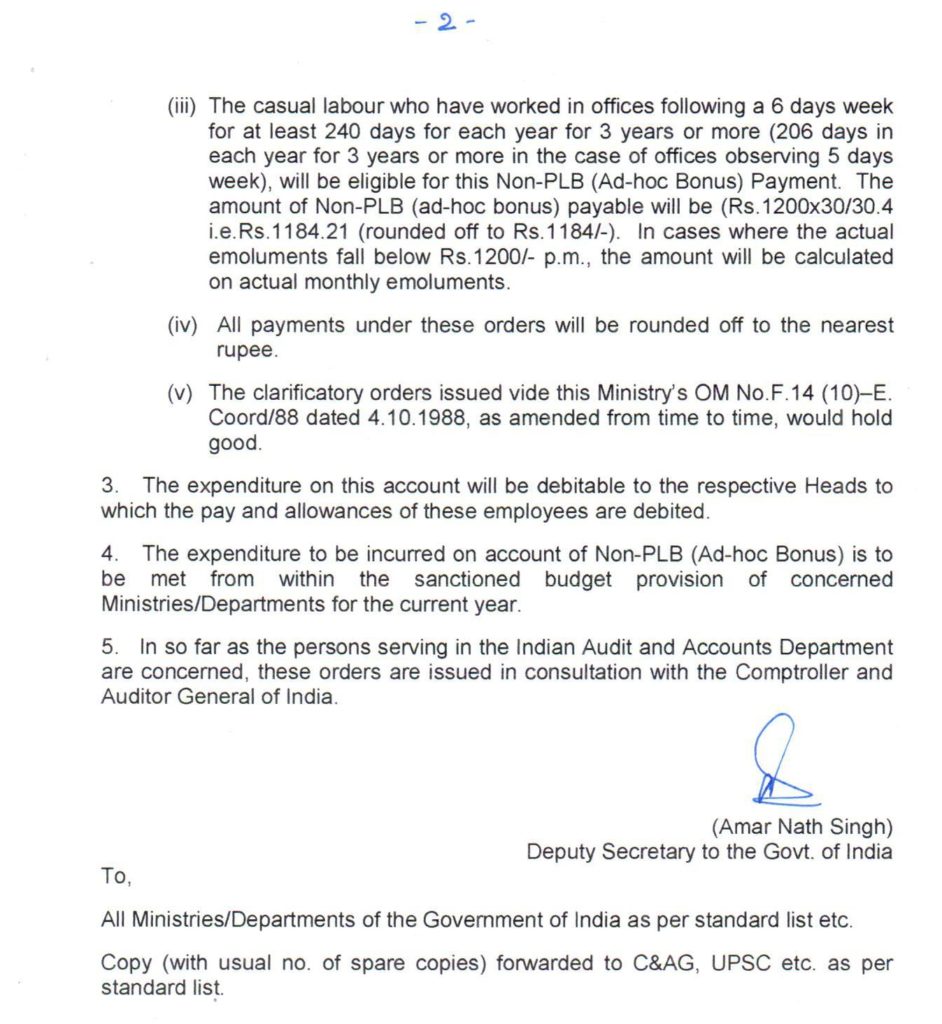 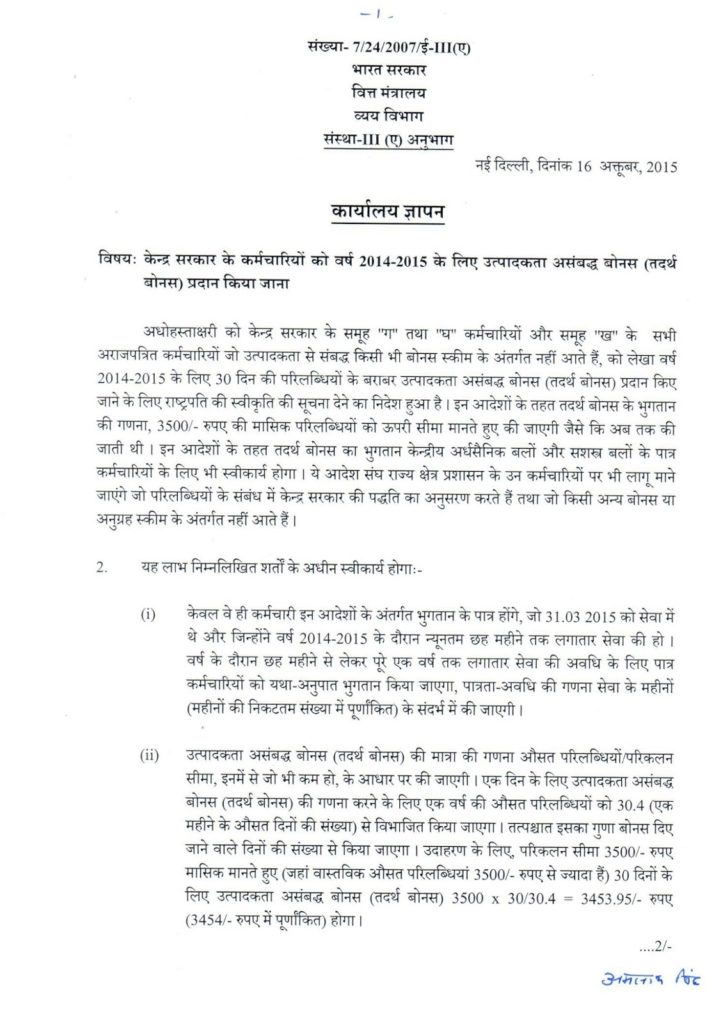 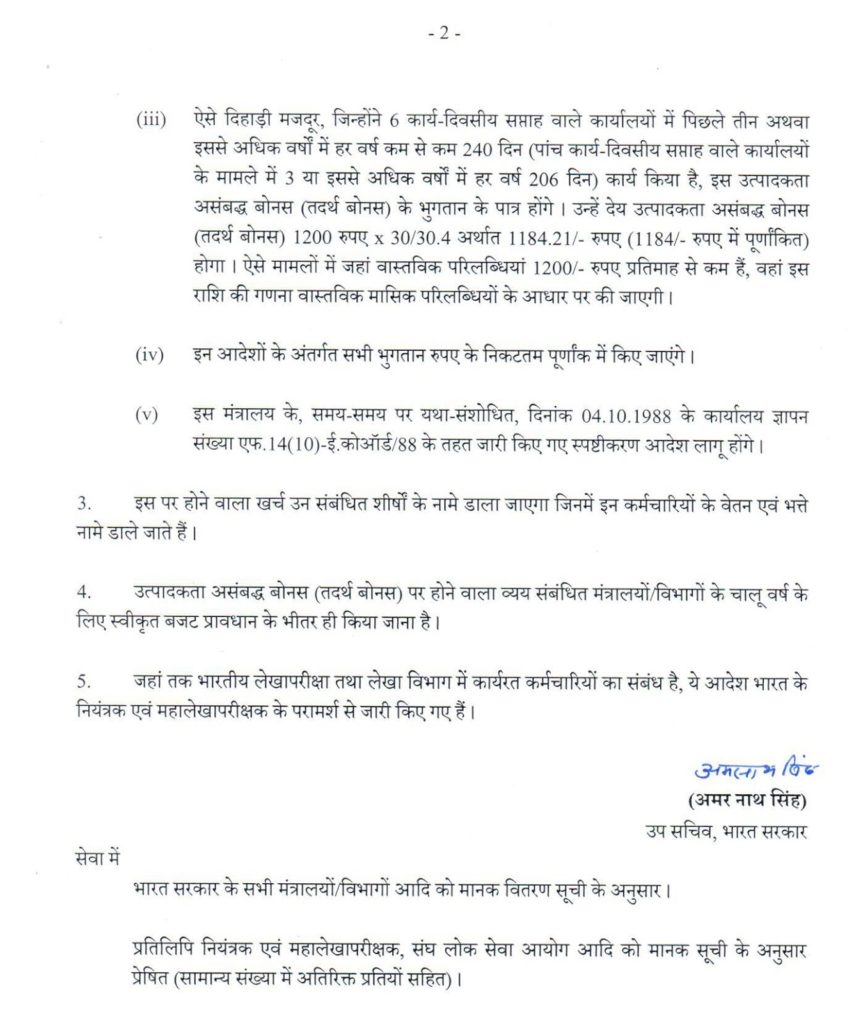