Employees engaged as Casual Worker prior to January 1, 2004, but regularised thereafter would be governed by the old pension scheme: Supreme Court 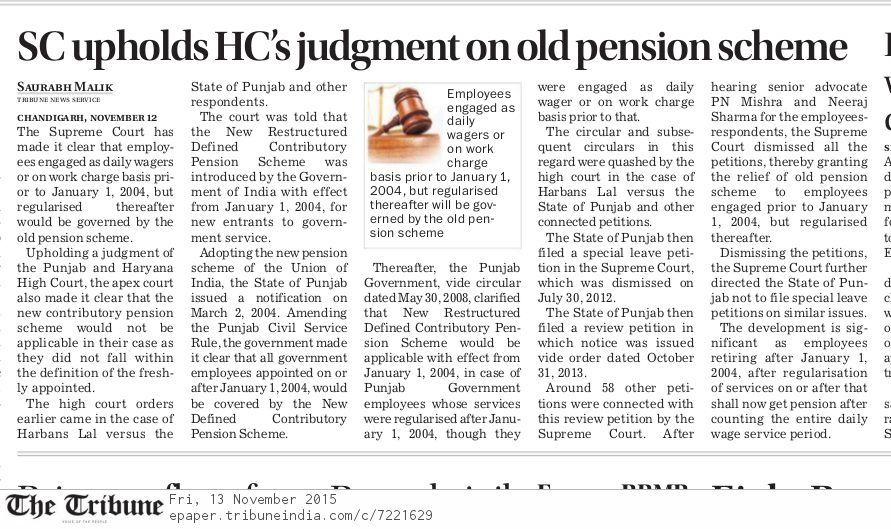 Chandigarh, November 12
The Supreme Court has made it clear that employees engaged as daily wagers or on work charge basis prior to January 1, 2004, but regularised thereafter would be governed by the old pension scheme.
Upholding a judgment of the Punjab and Haryana High Court, the apex court also made it clear that the new contributory pension scheme would not be applicable in their case as they did not fall within the definition of the freshly appointed.
The high court orders earlier came in the case of Harbans Lal versus the State of Punjab and other respondents.
The court was told that the New Restructured Defined Contributory Pension Scheme was introduced by the Government of India with effect from January 1, 2004, for new entrants to government service.
Adopting the new pension scheme of the Union of India, the State of Punjab issued a notification on March 2, 2004. Amending the Punjab Civil Service Rule, the government made it clear that all government employees appointed on or after January 1, 2004, would be covered by the New Defined Contributory Pension Scheme.
Thereafter, the Punjab Government, vide circular dated May 30, 2008, clarified that New Restructured Defined Contributory Pension Scheme would be applicable with effect from January 1, 2004, in case of Punjab Government employees whose services were regularised after January 1, 2004, though they were engaged as daily wager or on work charge basis prior to that.
The circular and subsequent circulars in this regard were quashed by the high court in the case of Harbans Lal versus the State of Punjab and other connected petitions.
The State of Punjab then filed a special leave petition in the Supreme Court, which was dismissed on July 30, 2012.
The State of Punjab then filed a review petition in which notice was issued vide order dated October 31, 2013.
Around 58 other petitions were connected with this review petition by the Supreme Court. After hearing senior advocate PN Mishra and Neeraj Sharma for the employees-respondents, the Supreme Court dismissed all the petitions, thereby granting the relief of old pension scheme to employees engaged prior to January 1, 2004, but regularised thereafter.
Dismissing the petitions, the Supreme Court further directed the State of Punjab not to file special leave petitions on similar issues.
The development is significant as employees retiring after January 1, 2004, after regularisation of services on or after that shall now get pension after counting the entire daily wage service period.

http://www.tribuneindia.com/news/punjab/courts/sc-upholds-hc-s-judgment-on-old-pension-scheme/157525.html
Stay connected with us via Facebook, Google+ or Email Subscription.