Minutes of Meeting of Standing Committee of NC(JCM) Staff Side held on 9th Oct, 2015

Subject- Minutes of Meeting of Standing Committee of National Council (JCM) Staff Side held on Friday, the 9th October, 2015 under the Joint Chairmanship of JS(AV), DoP&T – regarding.

The undersigned is directed to forward herewith a copy of the minutes of the Meeting of Standing Committee of National Council (JCM) Staff Side held on Friday, the 9th October, 2015 at lSOO hours in Room No. 190, Conference Room, North Block, New Delhi under the Chairmanship of Joint Secretary(AV) for information and necessary action.
Action taken report on the items pertaining to them may also be furnished to this Department at the earliest.
Encl: As above. Q fifidufiw
(G. Srinivasan)
Deputy Secretary (J CA)
Telefax No. 23093074 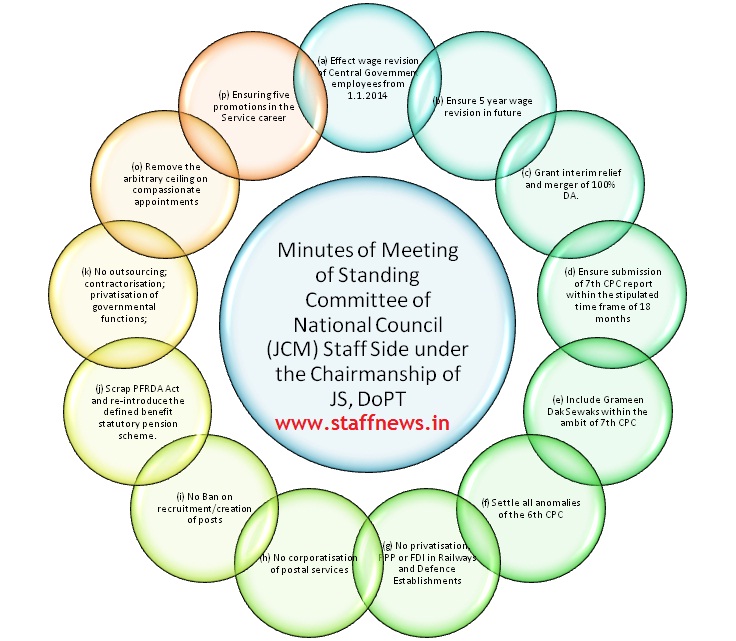 Minutes of the meeting of the Standing Committee of National Council (JCM) side under the Chairmanship of Joint Secretary“ AV)I DOP&T with the Staff side at 1500 hours on 09.10.2015

The meeting ended with thanks to the Chair.