Clarification on Reimbursement of Children Education Allowance reg. criteria of eligibility of a school

To,
All PCsDA/CsDA
PCoA (FyS) Kolkata

The matter regarding admissibility of CEA in r/o of the children studying in Pre-primary schools run by Army welfare Education Society (AWES) was referred to MoD by Hqrs office.
2. MoD D (Pay/Services) has stated that criteria of eligibility of a school is clearly mentioned in para 3 of DOPT O.M. No. 21011/03/2008-Estt (A) dated 23rd November, 2009 which reads “Recognized school/institution in this regard means Govt. school or any education institution whether in receipt of Govt. aid or nor, recognized by the Central or State Govt. or Union territory administration or by University or a recognized educational authority having jurisdiction over the area where the institution is situate.” The MoD D (Pay/Services) has further stated that it is for the concerned beneficiaries to obtain the necessary details from the school regarding its recognition by the concerned authorities and submit them to the paying authorities alongwith the claim for reimbursement.

3. The subject claim may be regulated accordingly.

This issues with approval of JT.CGDA(AT-I) 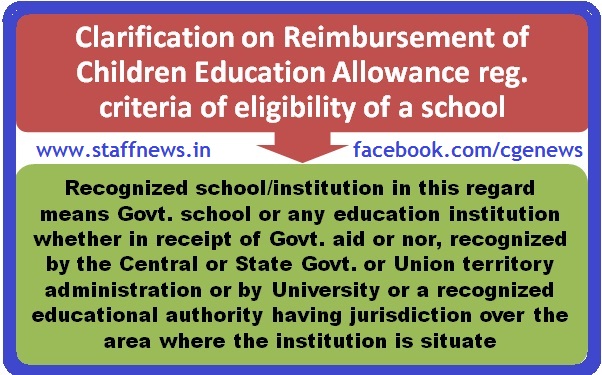