Recruitment of Women in Police

Recruitment of Women in Police

POONAM MAHAJAN
Will the Minister of
HOME AFFAIRS be pleased to state:-

(a) whether several States have an affirmative action programme in place to ensure recruitment of women as police personnel in the country;
(b) if so, the details thereof including the names of States that adopted the said programme and the percentage of women personnel in each State police force, Statewise;
(c) whether affirmative action has enhanced the presence of women in the police force and if so, the details thereof and if not, the reasons therefor;
(d) the action taken by the Government to ensure gender parity in police force thereby making it more representative and raising the quality of policing; and
(e) whether the Government is considering to initiate changes in retention and promotion policies to make policing an attractive career option for women and if so, the details thereof?

(a) to (e): “Public Order” and “Police” are “State subjects” as per entry 2 of the list II of the VII schedule of the constitution of India. Therefore, it is the responsibility of the State Governments/UTs administration to give adequate representation to women in the State Police Forces.
The Centre advises the States from time to time to bring in requisite reforms in the police administration. Ministry of Home Affairs has issued an advisory dated 04.09.2009 and 22.04.2013 to all State/UTs Governments to increase of women police to 33% of the total strength. The percentage of Women Police personnel in States/UTs Police Force is annexed. 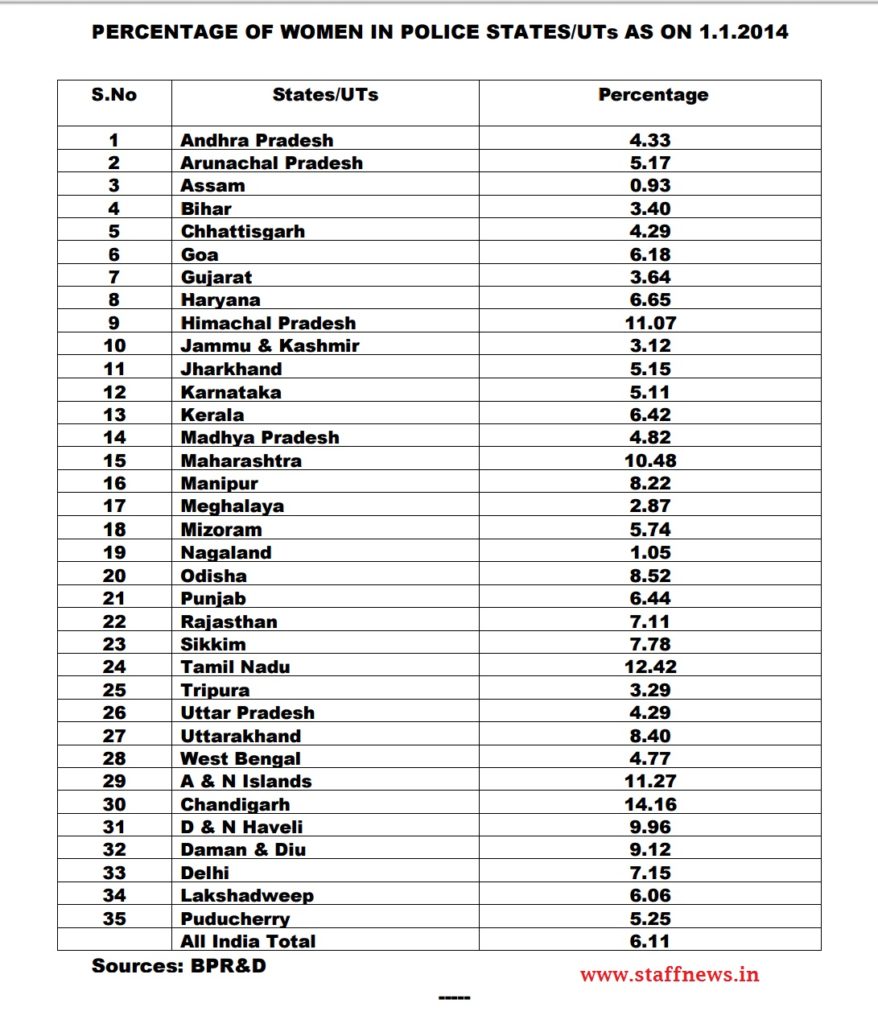 All the State Governments have been requested to create additional posts of women constable/Sis by converting the vacant posts of male constables into the posts of women constables. It has also been aimed that each police station should have at least 3 women sub-inspectors and 10 women police constables, so that a women help desk is manned round the clock. The combined efforts of the Central and various State Government/UTs are encouraging and the percentage of women police personnel is increasing gradually.
The Parliamentary ‘Committee on Empowerment of Women’ has stressed to make presence of women police personnel more visible vis-à-vis their male counterparts so that the gender issues at the local level are addressed more emphatically. Apart from adequate representations of women, efforts are made to improve the working conditions at their working place to attract more women to join police forces. An advisory had also been issued on 21.5.2014 to evolve a uniform policy for establishing facilities at the work place so as to mitigate the problems faced by them during the long working hours.