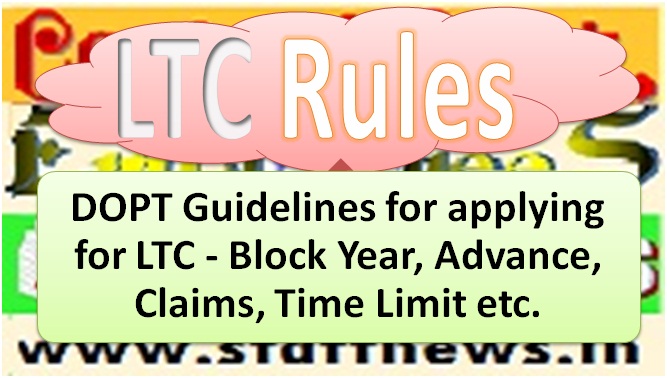 1. Please ensure that you have applied for leave and submitted the self-certification form to your Administration before the LTC journey is undertaken.

4. In case of fresh recruits, LTC to Home Town is allowed on three occasions in a block of four years and to any place in India on the fourth occasion. This facility is available to the fresh recruits only for the first two blocks of four years applicable after joining the Government service for the first time. (For details, please refer to DoPT’s O.M. No. 31011/7/2013 -E stt. (A-IV) dated 26.09.2014 available on www.persmin.nic. in’ << `OMs & Orders'<< ‘ Frequently Asked Questions (FAQs) on LTC entitlements of a Fresh Recruit’)

5. A Fresh recruit may at his option choose to avail LTC under the normal LTC rules as applicable to other Government employees. In this case he/she will not be allowed to avail other LTCs as admissible to the fresh recruits in that block of four years.

6. The retiring Government employees are eligible to avail LTC as per their entitlement provided that the return journey is performed before their date of retirement. LTC is not allowed after retirement.

7. The Journeys on LTC are to be undertaken in the entitled class of the Government servant in public/Government mode of transport.

8. Travel by private modes of transport is not allowed on LTC, however, wherever a public transport is not available, assistance shall be allowed for the private transport subject to the certification from an Appropriate Authority that no other public/Government mode of transport is available for that particular stretch of journey and these modes operate on a regular basis from point to point with the specific
approval of the State Governments/Transport authorities concerned and are authorised to ply as public carriers.

9. If a Government servant travels on LTC upto the nearest airport/ railway station by authorized mode of transport and chooses to complete rest of the journey to the declared place of visit by ‘own arrangement’ (such as personal vehicle or private taxi etc.), while the public transport system is already available in that part, then he may be allowed the fare reimbursement till the last point where he has travelled by the authorised mode of transport. This will be subject to the undertaking from the Government employee that he has actually travelled to the declared place of visit and is not claiming the fare reimbursement for the part of journey performed by the private owned/operated vehicle.

10. Government Servant may apply for advance for himself and/or his family members before the proposed date of the outward journey and he/she is required tickets within ten days of the drawal of advance, irrespective of the date of commencement of the journey.

11.Reimburseme under LTC scheme does not cover incidental expenses and
expenditure incurred on local journeys. Reimbursement for expenses of journey is allowed only on the basis of a point to point journey on a through ticket over the shortest direct route.

12.The time limit or submission of LTC claim is :

13. Government employees entitled to travel by air are required to travel by Air India only Class at LTC-80 fare or less unless permitted to do so by any is provision.

14.Government employees not entitled to travel by air may travel by any airline,However,reimbursement in such cases shall be restricted to the fare of their entitled Class of train/transport or actual expense, whichever is less.

15.In all cases whenever a Govt. servant claims LTC by air, he/she is required to book the air tickets ither directly through the airlines or through the approved travel agencies viz: M/s Balmer Lawrie & Co. Ltd/ M/s Ashok Tours & Travels Ltd/IRCTC. Bookin of tickets through any other agency is not permissible.

16.Travel on tour packages is not allowed, except in the case of tours conducted by Indian Touris Development Corporation (ITDC), State Tourism Development Corporation (STDC) and Indian Railway Catering and Tourism Corporation (IRCTC). In such cases, only the fare component shall be reimbursable provided ITDC/STDC/IRCTC separately indicate the fare component and certify that the journey was act I ally performed by the Government servant and his family members for which he/sh claiming the Leave Travel Concession.

17.Please ensure that your LTC claim is as per the instructions to avoid rejection of your claim.

“Have a pleasant journey and a happy holiday”


2. Proforma for self-certification by the Government employee – Procedure of Processing of LTC claims