2. The issue of simplification of FIGS, presently in the form of a booklet, was considered and with the approval of Board, it has been decided that individual FICs should be issued to the retiring/retired railway officials and the Widows of railway employees in the form of computer printed and laminated cards on the model enclosed as Annexure-L As it is stipulated in the Pass Rules that the Railway Administration should issue FIC, for the first time simplified FICs may be issued. free of cost. However, issue of duplicate FICs should be on receipt of a written request, accompanied by a copy of FIR filed on loss of the card and payment @ Rs.25/- per card.
3. The Railways should commence issue of individual FICs within 2 months from the date at of issue of these instructions. It has also been decided that in order to avoid any rush, FICs in the booklet form issued till March 2015 with 7 years validity may be replaced free of cost with individual FICS as and when they become due for renewal. However, if any retired official requests for individual FICs in lieu of old FIC before the expiry of validity, such requests may not be denied and individual FICs should be issued free of cost treating it as renewal. In case of officials who retired after April 2015 and got an FIC with life time validity, they may be allowed to get it replaced with individual FICs, free of cost, as per their convenience. FICs in the booklet form will, however, continue as a valid identity proof for travel on PRCP till its replacement with individual FICs in due course so that pensioners do not face any problem while travelling. Individual FICs for travel on Widow Passes may also be issued on the same model.
4.  The following instructions issued vide Board’s letter ‘ of even no. dated 04.06.2003 would continue to be in force:-

(i) The identity card should be carried by the spouse/dependent children during journey and produced on demand by the Ticket Checking Staff.

(ii) The FICs, Will be issued by the office from where the employees retired.

(iii) ‘ In case of retired employees/Widows drawing Post-retirement Complimentary Pass/Widow Pass from an office other than the office where the original FIC was issued, the renewal of the PIC shall be done by the authority who is issuing the pass to the applicant. For the purpose of renewal, the applicant shall submit the old FIC based on which renewal will be done.
(iv) Any addition in the PIC shall be done only by the office who issued the FIC for the first time. Renewing authorities shall have no power to carry out any addition in FIC. However, deletion of eligible member in FIC on account of death, marriage of daughter, etc. may be allowed on request.

5. Aadhaar No., if available may be incorporated in the FICs as indicated in the format. Necessary action may be taken by the Railways accordingly.

6. This issues with the concurrence of the Finance Directorate of the Ministry of Railways. 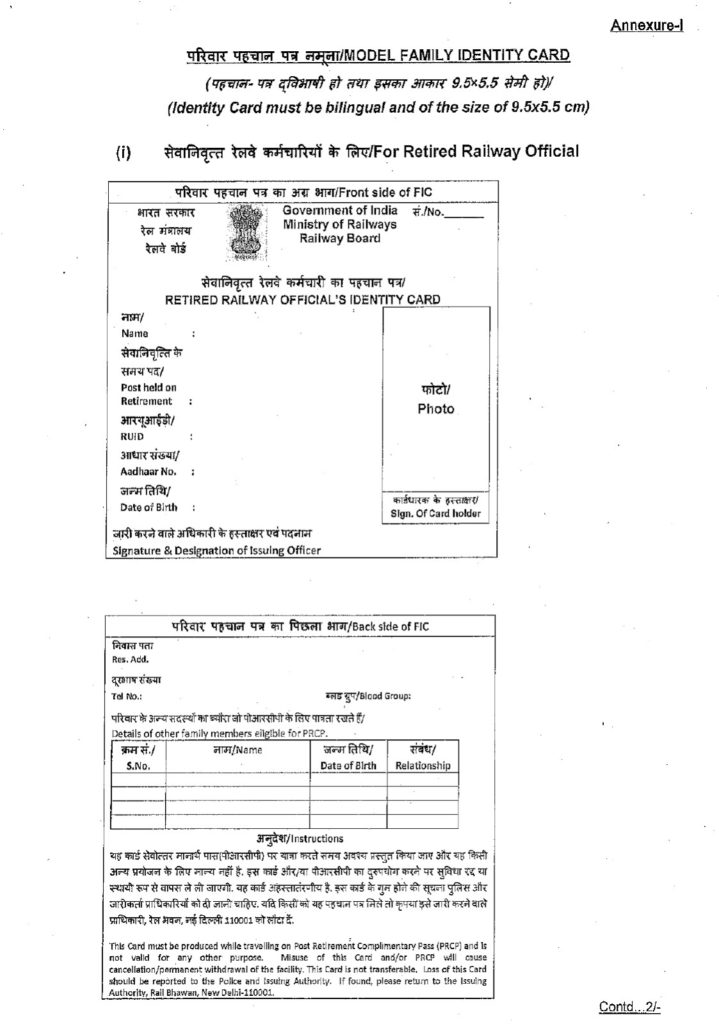 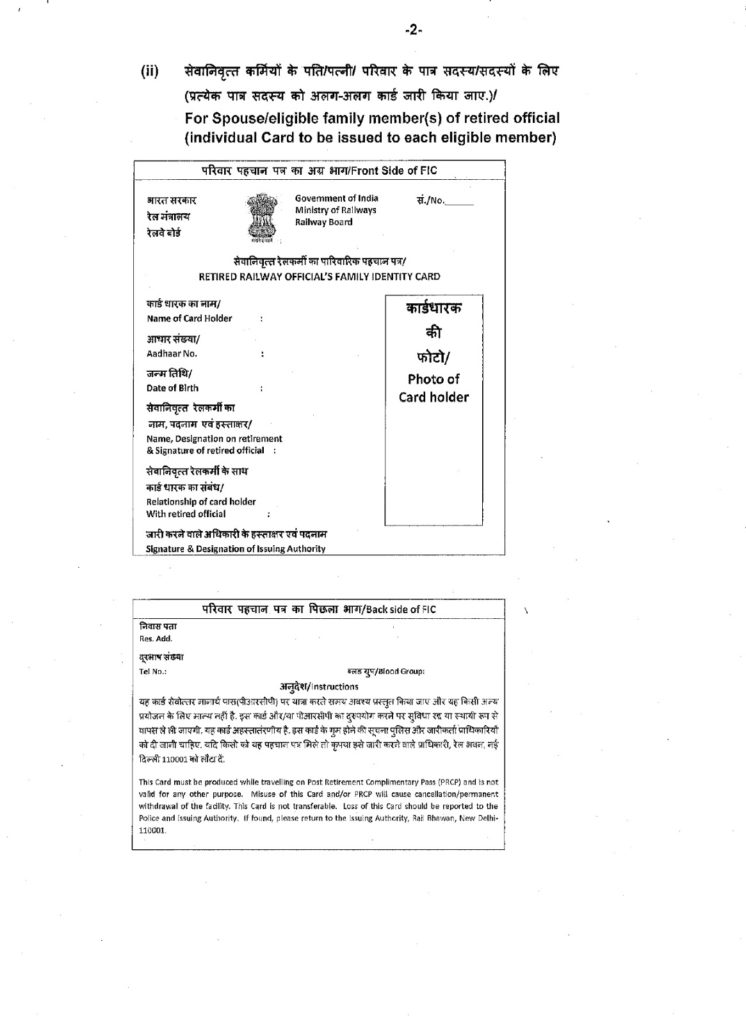 Loading...
Newer Post
Parameter for diagnosing Diabetes Mellitus and deciding of fitness in Compassionate Ground appointment in Railways
Older Post
Guidelines to curb practice of obtaining donations by the associations formed by either employees or their spouses

Ranjith Padmanabhan: Sir it will be a good time for us to come to talk to our service people who can help us immediately my respect to you sir Jai Hind Jai bharat.

Ranjith Padmanabhan: Some ex service man like my elder brother who on medical category" E"eeee in the year 1970 fill now he has not got anything if the government can help the soldier jai hind jai bharat.

M.K.KUMAR: If you do not want facility of RAILWAY HOSPITAL you can surrender your card; then you will get FMA amount to your concerned Office.