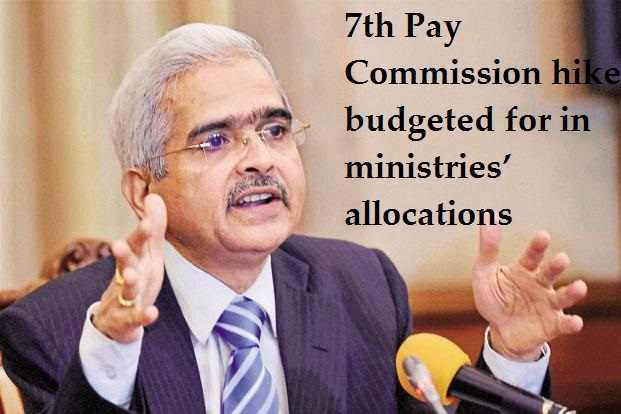 The voluminous budget documents state that “the implementation of the Seventh Pay Commission due from January 1, 2016 is to be implemented during the financial year 2016-17 as also the revised One Rank One Pension scheme for Defence services.” “The government has made provisions for the additional liabilities on these count,” it said, without giving the amount allocated for implementation.

Economic affairs secretary Shaktikanta Das said the number cannot be quantified and it has been built up in budget of various ministries. “We cannot really quantify how much we require in 2016-17. Because the Committee of Secretaries have to first give its recommendations, then govt will take a decision and then only we will know what is the requirement in FY17,” he said in New Delhi.
Implementation of the pay commission report is to cost the government Rs.1.02 trillion. “We have the Pay Commission recommendations with us, we have analysed the likely requirement and it has been built into the Budget of various ministries. Some suitable interim provisions have been made,” he said without elaborating.
“Hence the expenditure and revenue numbers are credible.” Das said finance minister Arun Jaitley in his budget speech stated that interim provisions have been made. “And these provisions are there in the Demands for Grants for individual departments and ministries. It is built into and subsumed into those allocations.”
“The Budget reaffirmed the commitment of the government to continue with the process of fiscal consolidation as projected in the Medium Term Fiscal Policy Statement of 2015-16 despite a tough external environment,” the budget documents said. Accordingly, fiscal deficit has been projected at 3.5% of the GDP in 2016-17.
“In accordance with the amended FRBM targets, the fiscal deficit of 3 per cent is projected to be achieved in 2017-18 onwards.” “Keeping in view the challenge of reduction of fiscal deficit by 0.4 per cent of GDP in a difficult year in 2016-17 with substantial additional liabilities on pay revision etc, the government is quite optimistic of fully achieving the fiscal deficit target of 3 per cent or below by March 2018,” the documents said. PTI

Loading...
Newer Post
Seventh Pay Commission hikes may be lower: DNA
Older Post
7th CPC: NJCA has decided to continue with the preparation of the Strike