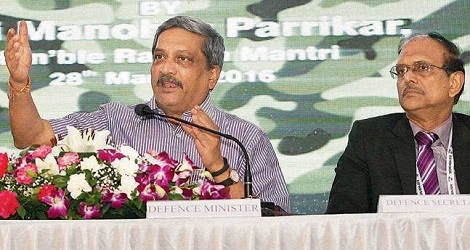 Defence Minister Manohar Parrikar on Tuesday said the recommendation of 7th Pay Commission was not final and he would take up concerns raised by the Armed Forces at the right level.

In an exclusive interview with the India Today, Parrikar said he has prepared ground for smoothening the defence procurement which needed to be backed by deliveries now.
On the concerns raised by the Armed Forces over the raw deal given to them in the 7th Pay Commission, Parrikar said it was not the final word. “The seventh Pay Commission is in the form of recommendations. I do not think they (recommendations) will remain. I do not consider them as finalities. I have flagged them and will flag them properly at the right level,” said the defence minister.
Parrikar, who inaugurated arms show DefExpo in Goa on Monday where a strong pitch is being made to further expand the growing defence sector, said negative environment surrounding the military acquisitions has changed.

“I will not claim that I have turned it around completely but at least something has been done so that deliveries can start. Ground has been prepared. Delivery is now the key word,” said Parrikar adding that there was an environment of mistrust, suspicion which can be frustrating in dealing with forces.
He said the industry cannot be held responsible for responding slowly to the changing atmosphere. “They have experienced a congested atmosphere and the breeze has only now begun flowing in. However, it cannot happen overnight. Confidence building measures are in place. Industry has begun responding,” he said outlining how smaller changes have been made.
“Offsets have taken off, exports are improving, procurement from local level has gone up. At the capital procurement level, it has not taken off or turned into a big deal because it takes longer. Industry has definitely responded.” Talking about the defence reforms like the appointment of a Chief of Defence Staff, Parrikar said there are no hurdles in bringing defence reforms. “There has to be a rational decision. Drafts are being prepared and shared. Very soon it will be brought to the Cabinet,” he said.
Asked about delay in development of critical equipment like Intermediate Jet Trainers (IJT) for the IAF or submarines for the navy, Parrikar said the air force does not think the IJT is a requirement as it is training on simulators, Basic Trainer Aircraft and Advanced Jet Trainer. “Instead of three, it is a two-level, re-caliberated approach. The proposal for six under-construction Scorpene submarines is moving smoothly. Next project P75, I will tag along with our policy document on Strategic Partnership,” Parrikar said.

“When it will come about? Very soon, but I am not willing to issue a timeline. As far as Arihant, the issue should not be discussed. We are equally concerned and are moving in the right direction,” he said. The three services raised a number of issues, but when the pay commission sought the defence ministry’s comments and recommendation, the ministry negated most of the demands of the services, the officer said
Read at: India Today