Kiran Kumari 2 April 8, 2016 3:51 am
As published by Maj Navdeep Singh on his IndianMilitary.info blog:-
Biggest news of 2016 for Central Government pensioners 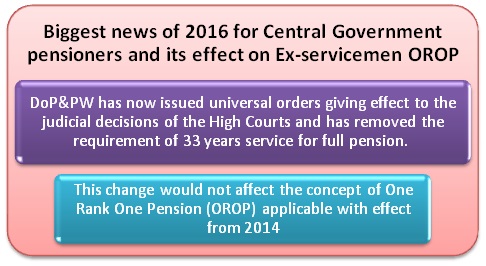 Most readers would be aware that the orders regarding calculation of pension of pre-2006 retirees based on minimum of pay within the pay band for each separate grade/rank and not on minimum of the pay band itself, with arrears from 01-01-2006 rather than 24-09-2012, were issued for Central Government pensioners in July 2015 by the Government as per the decision of the Delhi High Court, which essentially followed a decision of the Punjab & Haryana High Court, and then upheld by the Supreme Court. The High Court had held that the anomaly (though later removed by the Government itself from 24-09-2012) had to be removed from the date of the inception of the anomaly, that is, 01-01-2006. Similar orders were later issued by the Ministry of Defence.
On a similar analogy, many decisions by various Benches of the Central Administrative Tribunal (and then upheld by the High Courts) were rendered de-linking the service requirement of 33 years for grant of full pension for pre-2006 retirees at par with post-2006 retirees for whom there is no such requirement. Some Special Leave Petitions preferred by the Government against such orders were also dismissed, though not by way of detailed decisions. The Punjab Haryana High Court had also passed a detailed verdict on the same subject for pensioners of the Central Armed Police Forces. Till date, the pensions of pre-2006 pensioners with less than 33 years of service (including weightage) were being calculated by way of proportionate reduction.
Through this earlier post dated 22-01-2016, in view of multiple queries in this regard, I had informed by way of general information that the matter of issuance of orders on this subject for similarly placed retirees was being examined by the Department of Pensions & Pensioners’ Welfare, Ministry of Law & Justice and Ministry of Finance.
The Department of Pensions and Pensioners’ Welfare has now issued universal orders giving effect to the judicial decisions of the High Courts and has removed the requirement of 33 years service for full pension. Now, irrespective of length of service, all pre-2006 pensioners shall be eligible for full pension as is admissible to those pre-2006 pensioners who had rendered 33 years or more service including weightage. Full arrears are also admissible with effect from 01-01-2006. The biggest gainers would be voluntary retirees and those released from service on medical grounds or before completing full service. The orders can be downloaded by clicking here. Similar orders should now be issued for defence pensioners also by the Ministry of Defence.
A word of caution- This change would not affect the concept of One Rank One Pension (OROP) applicable with effect from 2014 since while this development is based on 50% of minimum emoluments introduced by the 6th Central Pay Commission for each grade, the concept of OROP is based on live data of actual pension based on real time emoluments as per length of service of in-service personnel. Readers are hence requested not to mix up the two dispensations which operate by way of separate dynamics.
We must again place on record extreme gratitude to the Department of Pensions and Pensioners’ Welfare functioning under Ministry of Personnel, Public Grievances & Pensions which has once again taken a stand for all Central Government pensioners and ensured issuance of universal directions just on simple dismissal of a Special Leave Petition by the Supreme Court even without a detailed order. One cannot also help but compare this with the attitude of the Ministry of Defence which continues to file appeals against its pensioners and disabled pensioners based on artificial distinctions even when the law has been fully settled by the Supreme Court in a plethora of detailed landmark decisions and which also militates against the grain of the opinion expressed by the highest of political executive, including the Prime Minister. I however maintain and retain full hope that the current Raksha Mantri would be able to rein in the unruly horses.
Jai Hind.

Read at: http://www.indianmilitary.info
Stay connected with us via Facebook, Google+ or Email Subscription.

Benny P John: Very informative. I have got good clarification through your FAQ series