Celebration on 21st June 2016 as ‘International Day of Yoga’: Railway Board Order

In order to enhance the awareness about yoga benefits among Indian Railways employees and to mark it as a great event in the Indian history, it has been decided that this year also we may celebrate 21st June 2016 (Tuesday) as International Yoga Day all over Indian Railways.

In this connection, a copy of “Common Yoga Protocol-2016” of 45 minutes duration brought out by Ministry of Aayush, Government of India is sent herewith. Since 21.5.2016 is a working day, it is requested that Railways/PUs/PSUS may organize yoga programmes for the duration of at least 45 minutes duration as per Common Yoga Protocol, advised by Ministry of Aayush (copy enclosed). CDs and Booklets on different yoga asnas & kriyas have already been provided to Zonal Railways/PUs last year itself.

All officers/officials may be motivated to participate on this occasion in large numbers by explaining them the benefits & importance of yoga in our life.

Kindly acknowledge receipt of this letter.

Copy to: Secretary,Railway Board. He is requested to make arrangements to celebrate 21.6.2016 as 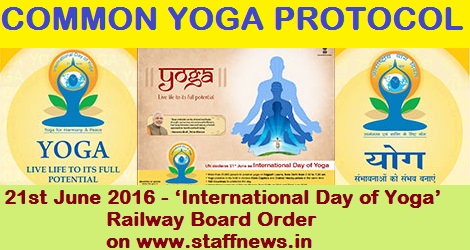