Working on the fast track to implement Rail Budget Announcements of 2016-17 ranging from improving passenger amenities to infrastructure development, Minister of Railways Shri Suresh Prabhkar Prabhu in a programme held today i.e. 29.04.2016 at Rail Bhawan inaugurated two very important budget announcements of (i) Cancellation of PRS counter tickets through IRCTC website and 139(IVRS & SMS) and (ii) Acceptance of International Debit and Credit Cards for payment for e-ticketing through IRCTC website. Shri Manoj Sinha, Minister of State for Railway was specially present to grace the occasion. Chairman, Railway Board, Shri A.K. Mittal, Member Traffic, Railway Board, Shri Mohd. Jamshed and other Board Members were present on the occasion.
Speaking on the occasion about these services, Shri Suresh Prabhakar Prabhu, said that the Indian Railways is the second largest commercial organization of the world which has lot of challenges before it becomes of world standard. He said that Railways is a big organization and its some areas need complete revamping and thus multiple strategies need to adopted and implemented to improve in all spheres. He said that Railways income generation and expenditure needs to be accounted closely so that there can be best use of the public money. He said that Railways principal source of revenue is freight and passenger fares which is 2/3 and 1/3 respectively and thus Railways’ development in all respect depends solely on the improvement of its both these services. He said that the service of Cancellation of PRS counter tickets through IRCTC website & 139 and Acceptance of International Debit and Credit Cards for payment for e-ticketing through IRCTC website is a step towards digital technology which will reduce cash handling. He assured more passenger friendly services in the coming time.
Speaking on the occasion, Minister of State for Railways Shri Manoj Sinha said that development of Railways is not a single-handed task and thus concerted efforts are necessary which railway personnel are doing day and day out. In a very short span of time of around two months, as many as 8 budget announcements have been fully implemented by the Railway Ministry which has been possible by the mechanised system.
Salient Features Of the Schemes Launched : –

* A new page will be given on IRCTC website (www.irctc.co.in) without any login ID for purpose of cancellation of PRS counter tickets.
* Passenger will be asked to enter the PNR number & Train number along with captcha.
* The details entered by passenger shall be validated and an OTP will be sent to the passenger to his mobile number given at the time of booking the ticket. The OTP received on the mobile will be entered by the passenger in the web page and it will be validated by the system.
* After receiving the confirmation OTP number from the passenger, full cancellation of PNR will be done and PNR will be marked as Cancelled but not refunded in the system. Seat/berth will be released and would be made available for booking both at PRS & IRCTC Website. Refund amount due will also be displayed to the passenger on the website.
* An SMS will be sent to the passenger with PNR and fare details – ”Your ticket has been cancelled. PNR, xxxxxx, Amt,xxxxx. Refund of fare amount shall be collected only at the journey commencing station or nearby satellite PRS locations as per the notified time”.
* All the Privilege/Duty pass/PTOs/complimentary pass tickets shall be allowed to be cancelled through website or through 139.
* All types of PNRs including i-tickets (after printing) and system tickets booked across counter/post office/YTSK/Go India terminals/Bank terminals etc.’ will be allowed to be cancelled on website except the following:
(a). Circular Journey tickets and onwards tickets booked against CJT.
(b). Foreign tourists PNRs against which berth allotment has been done
(c). ATAS generated new PNR
(d). Duplicate ticket.
(e). Cluster ticket and pre-bought ticket.

Rail Ticket booked through Railway Reservation counter can be cancelled through Railway Enquiry 139. Service will be available on 139:
(a). IVR with Agent Assistance
b). SMS Service
(a). Cancel through 139 using IVR(Agent Assistance)
(i). Customer will call on 139 and select Option ‘6’ from IVR main menu.
(ii). IVR will ask whether it is Counter Ticket or E- Ticket. Press 1 for Counter Ticket or Press 2 for E-Ticket.
(iii). In case customer selects E-Ticket option, IVR will play a message “Currently ticket booked through Railway Reservation Counter only can be cancelled through 139. Press 8 to go back to main menu”
1. Once customer selects Counter Ticket option, call will be transferred to agent for cancellation.
2. Agent will ask the following information from customer to process the cancellation.
a. PNR Number
b. Train Number
3. Agent will retrieve ticket information from the server and confirm it with the customer.
4. After ticket details confirmation, agent will click on “Generate OTP” button to generate the OTP. System will validate the calling number of customer with the number mentioned in ticket details from the system.
5. If mobile number validation fails, agent will advise the customer to call from the same number mentioned at the time of booking the ticket. If number is successfully validated, OTP will be delivered on passenger’s mobile number which he would convey to agent.
6. Agent will enter OTP on CRM and will click “Submit” button to process the cancellation. Ticket will be cancelled and refundable amount will be display on agent screen. Agent will communicate the same refundable amount to customer.
7. Customer has to collect the permissible refundable amount across the PRS counter within the prescribed time limit.
(b) Cancellation through SMS to 139:
(i). User has to send PNR Number & Train Number to 139 in the syntax given below:
CANCEL<PNR Number><Train Number> to 139
Example: CANCEL 2303529769 12420
(ii). User will get below response from 139 after mobile number verification:
“Dear User, We have received cancellation request against PNR number 2303529769, OTP against this request is 123456. To confirm ticket cancellation send SMS OTP 123456 to 139.
(iii). User has to send OTP number received back to 139 for second level of confirmation.
OTP <OTP received on Passenger Mobile Number> to 139
Example: OTP 123456
User will get below response from 139:
“Dear User, Your ticket with PNR number 2303529769 has been cancelled, refundable amount is Rs. —-.”
(iv) Passenger has to collect the permissible refundable amount within prescribed time limit across the PRS counter. 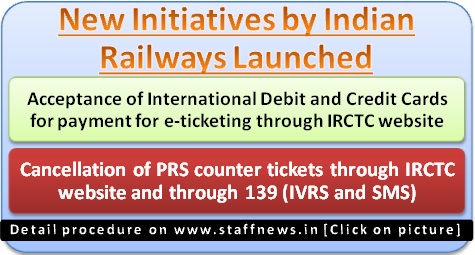