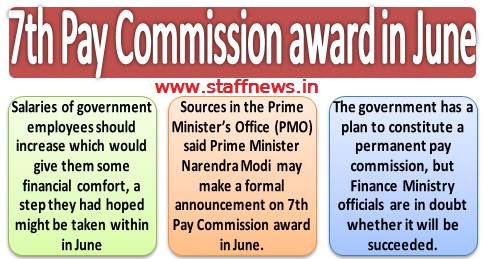 They had also said the salaries of government employees should increase which would give them some financial comfort, a step they had hoped might be taken within in June, when government will announce 7th Pay Commission award with major changes.

Sources in the Prime Minister’s Office (PMO) said Prime Minister Narendra Modi may make a formal announcement on 7th Pay Commission award in June.
The government has a plan to constitute a permanent pay commission, but Finance Ministry officials are in doubt whether it will be succeeded.
They also said the Finance Minister Arun Jaitley is likely to approve the proposal of review committee, which will propose minimum pay Rs 21,000 and maximum a round Rs 2,50,000 to Rs 2,70,000 to help central government employees cope with the inflation.
This will cost the exchequer Rs 1.02 lakh crore. However, in the Budget 2016 proposal, the government provided Rs 70,000 crore for the implementation of Seventh Pay Commission.
“The Finance Minister Arun Jaitley promised that the government will implement the 7th Pay Commission award in this financial year,” sources said.
The government has made allocation in the current fiscal’s budget to meet the 7th Pay Commission award which will require the government to spend Rs 1.02 lakh crore in addition to existing regular salary.
The 7th Pay Commission headed by Justice A K Mathur recommended on November 19, the highest basic salary at Rs 250,000 and the lowest at Rs 18,000 and its increased the pay gap between the minimum and maximum from existing 1:12 to 1:13.8, while all pay commissions made up pay gap between employees and officers from second Pay Commission 1:41 ratio to Sixth pay commission 1:12.
A 13 member a secretary-level Empowered Committee or review committee headed by Cabinet Secretary P K Sinha was formed in January to review Pay Commission’s report before cabinet nod.

Read more at: The Sen Times