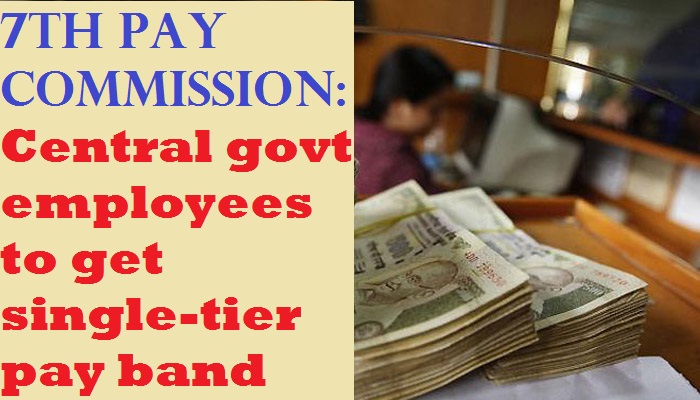 New Delhi: With the delay in implementation of 7th pay commission, every
day the media gets abuzz with some information on its recommendation
and on the various ways in which it can benefit crores of Central
government employees.

Fresh in the buzz is that the review committee, which was set up to
study the recommendations of the 7th pay commission is likely to propose
a simpler pay structure.
This will make the pay band more understandable. As per media reports
the review committee has suggested that the new pay structure be a
single-tier band, where the component of the salary will not be made up
in two parts as is the practice — one is the  pay band and the other
being the additional grade pay.
The government had set up the high-powered panel headed by Cabinet
Secretary P K Sinha to process the recommendations of the 7th Pay
Commission which will have bearing on the remuneration of 47 lakh
central government employees and 52 lakh pensioners.
The government has earlier stated that implementation of new pay scales recommended by the 7th Pay Commission is estimated to put an additional burden of Rs 1.02 lakh crore, or 0.7 percent of GDP, on the exchequer in 2016-17.

Loading...
Newer Post
Status of Cadre Review proposals processed in DoPT as on 30th April, 2016
Older Post
One Stop Government e-Marketplace (GeM) by DGS&D: Insertion of Rule 141-A in GFR 2005