The undersigned is directed to say that subsequent to implementation of the decision taken by the Government on the recommendation of the 7th Central Pay Commission, the President is pleased to decide that the Dearness Relief admissible to Central Government pensioners/family pensioners shall be as follows:
Note:- Dearness Relief at the rates indicated in the above table will also be admissible on the additional basic pension/additional family pension available to older pensioners/family pensioners based on their age as indicated in this Department’s OMs 38/37/2016-P&PW(A)(i) dated 04.08.2016 and 38/37/20 16-P&PW(A)(ii) dated 04.08.2016.
2. These orders apply to (i) Civilian Central Government Pensioners/Family Pensioners (ii) The Armed Forces Pensioners, Civilian Pensioners paid out of the Defence Service Estimates, (iii) All India Service Pensioners (iv) Railway Pensioners/family pensioners.
3. These orders will not be applicable on following categories:-
(i) The Burma Civilian pensioners/family pensioners and pensioners/families of displaced Government Pensioners from Pakistan, who are Indian Nationals but receiving pension on behalf of Government of Pakistan and are in receipt of adhoc ex-gratia allowance.
(ii) Central Government Employees who had drawn lump sum amount on absorption in a PSU/Autonomous body and are in receipt of 1/3rd restored commuted portion of pension.
(iii) Pensioners who are in receipt of provisional pension in the pre-20 16 pay scales/pay.
(iv) CPF beneficiaries, their widows and eligible children who are in receipt of ex-gratia payment in terms of this Department’s OM No. 45/52/97-P&PW(E) dated 16.12.1997 and revised vide this Department’s OM 1/10/2012-P&PW(E) dated 27.06.2013.
Separate orders will be issued in respect of the above categories.
4. Payment of DR involving a fraction of a rupee shall be rounded off to the next higher rupee.
5. Other provisions governing grant of DR in respect of employed family pensioners and re-employed Central Government Pensioners will be regulated in accordance with the provisions contained in this Department’s OM No. 45/73/97-P&PW (G) dated 2.7.1999 as amended vide this Department’s OM No. F.No. 38/88/2008-P&PW(G) dated 9th July, 2009. The provisions relating to regulation of DR where a pensioner is in receipt of more than one pension will remain unchanged.
6. In the case of retired Judges of the Supreme Court and High Courts, necessary orders will be issued by the Department of Justice separately.
7. It will be the responsibility of the pension disbursing authorities, including the nationalized banks, etc. to calculate the quantum of DR payable in each individual case.
8. The offices of Accountant General and authorised Pension Disbursing Banks are requested to arrange payment of relief to pensioners etc. on the basis of these instructions without waiting for any further instructions from the Comptroller and Auditor General of India and the Reserve Bank of India in view of letter No. 528-TA, 1I/34-80-U dated 23/0411981 of the Comptroller and Auditor General of India addressed to all Accountant Generals and Reserve Bank of India Circular No. GANB No. 2958/GA-64 (ii) (CGL)/81 dated the 21st May, 1981 addressed to State Bank of India and its subsidiaries and all Nationalised Banks.
9. In their application to the pensioners/family pensioners belonging to Indian Audit and Accounts Department, these orders issue after consultation with the C&AG.
10. This issues in pursuance of instructions of Ministry of Finance, Department of Expenditure vide their OM No. 112/2016-E.II(B) dated 4th Nov, 2016.
11. Hindi version will follow.
sd/-
(Charanjit Taneja)
Under Secretary to the Government of India 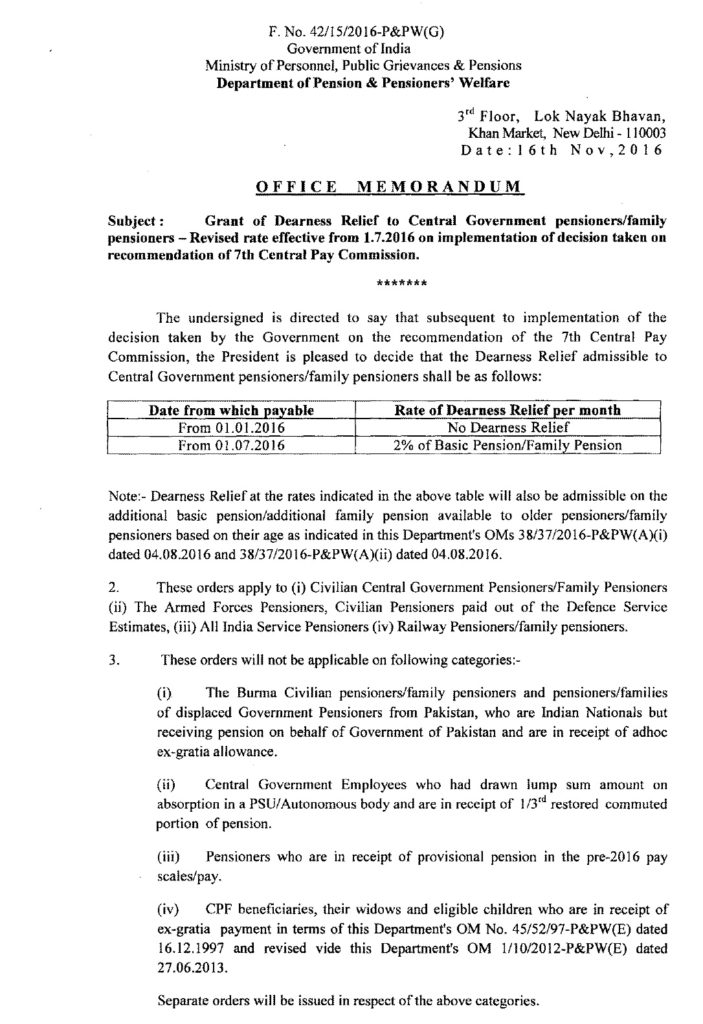 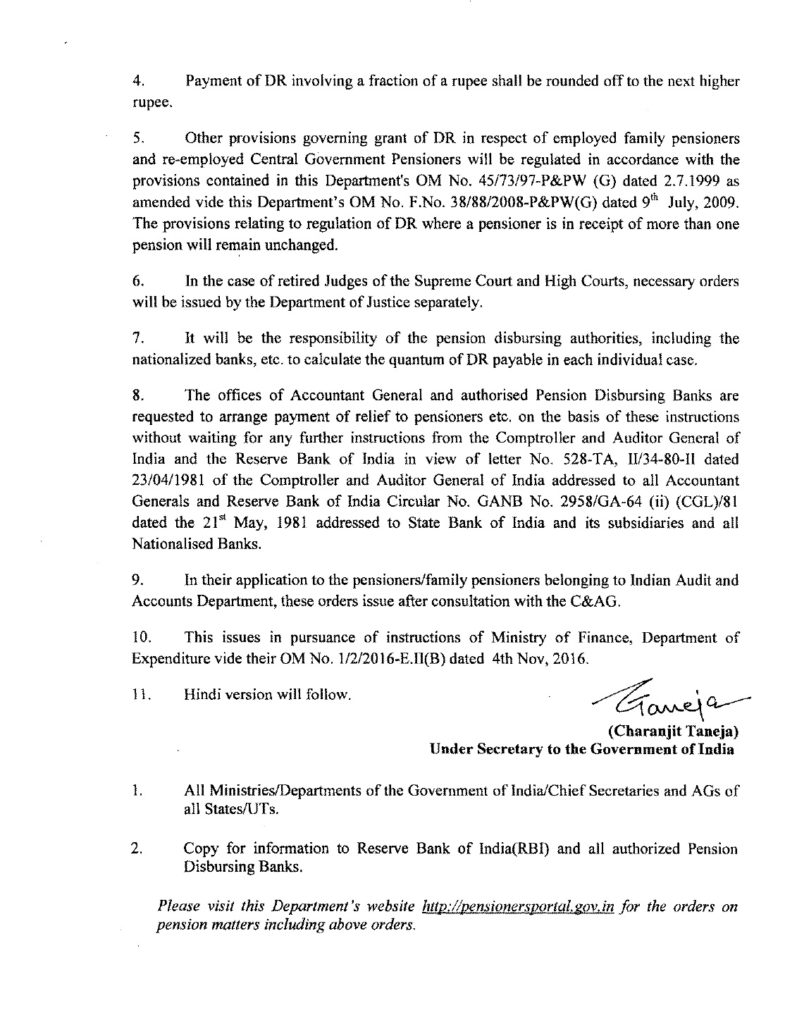