Duty hours of running staff: Decisions on Recommendations of the High Power Committee

During the PNM/AIRF meeting held on 22nd & 23rd November, 2016, the Federation (AIRF) raised a demand that a clarification is required to be issued on item no.(V) of Board’s letter of even number dated 13.10.2016 regarding limit of stay away from Headquarters in respect of Running Staff.
2. Therefore, as already conveyed vide Board’s letter No.E(LL)/2009/HER/1 dated 26.2.2010, it is reiterated that although the maximum limit of stay away from Headquarters has been prescribed as 72 hours, Board desires that all cases of absence/stay away from Headquarters of more than 36 hours should be monitored closely at the Divisional level and also periodically at zonal level with a view to restrict such absence/stay within reasonable limits, as was agreed in PNM/AIRF meeting held in October, 2009.
(D.V.Rao)
Director/Estt.(LL)
Railway Board

RBE No. 120/2016
Government of India
Ministry of Railways
(Railway Board)

The High Power Committee, constituted to review the duty hours of running staff and other safety related categories, had made its recommendations on various aspects related to working hours of these categories. The recommendations have been duly considered by the Board and in . modification of previous instructions on the subject, the following decisions have been taken:-
i) In respect of Loco Pilots (Shunting) who are presently working on fixed roster basis, the existing provisions will continue.
ii) In severe operational exigencies like acts of God, earthquakes, accident, floods, agitations, and equipment failure etc., the Controller
should suitably advise the staff that they may be required to work beyond the limits prescribed.
iii) Present classification of running staff under Railway Servants ( Hours of Work & Period of Rest) Rules, 2005, should be maintained.
iv) Subject to exigencies of service, a maximum limit of 125 duty hours per fortnight should be laid down for all Running Staff.
v) The limit of stay away from Head quarters for Running Staff should be fixed at 72 hours.
vi) Continuous night duty for Rucming Staff should be limited to 4 nights with Fourth night towards headquarters.
vii) As regards the duration of outstation rest, there will be no change in the existing provisions.
viii) Call notice period should continue to be a part of the headquarter/outstation rest.
ix) There will be no change in the existing provisions for Periodical Rest. However, preference should be given to Periodical Rest for 4 periods
of 30 consecutive hours.
x) The principle and period of averaging reckoned for the purpose of payment of Overtime Allowance will continue as per existing guidelines.
2. The existing provisions of the Railways Act, 1989 and Railway Servants (Hours of Work & Period of Rest) Rules, 2005, other than those mentioned above, will continue to,be in vogue .
3.This issues with the concurrence of Finance Directorate of the Ministry of Railways.
4. Please acknowledge the receipt.
Director Estt.(LL)
Railway Board 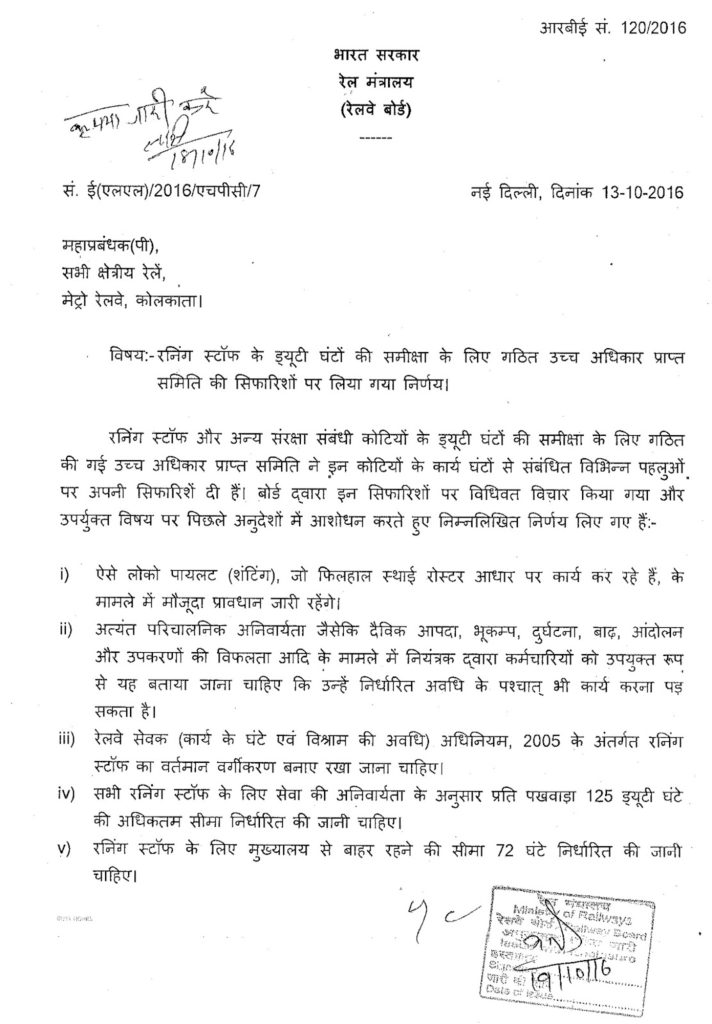 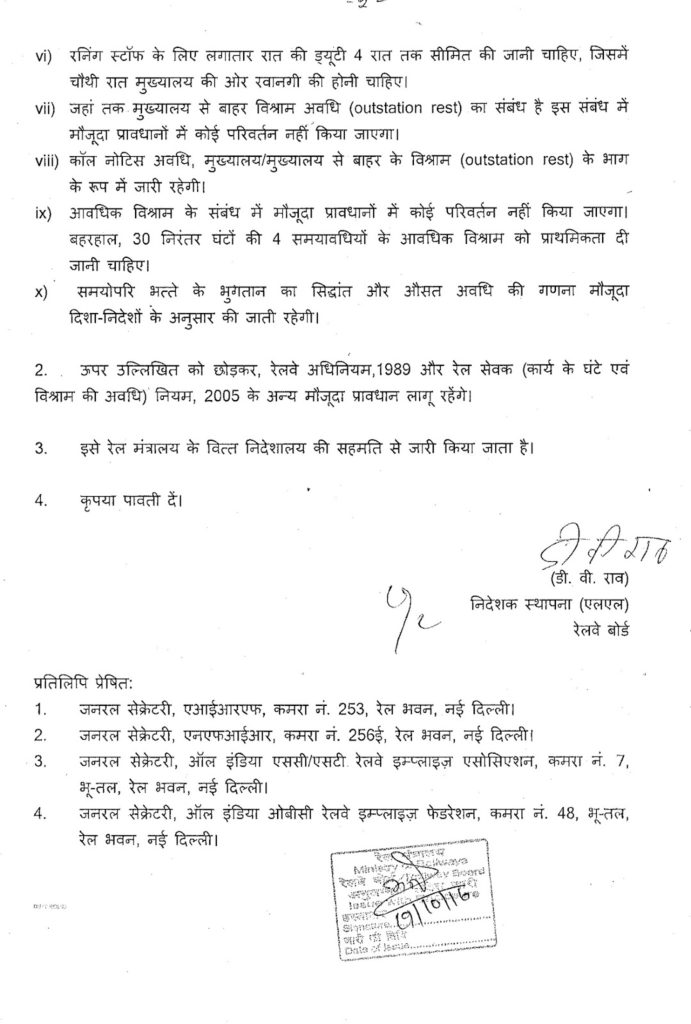