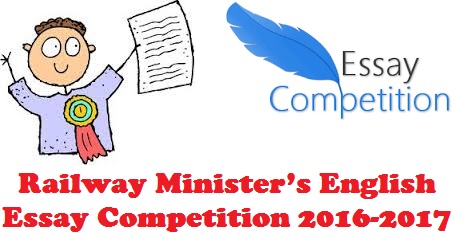 Government of India
Ministry of Railways
Railway Board

Railway Minister’s English Essay Competition’ is conducted every year and the following Prizes are awarded along with a certificate:-
2. The essays are required to be written (preferably typed) in English only in double space and on one side of the paper. The essays should be restricted to a word limit of 2000 failing which an entry shall-be disqualified. Every Railway employee whether permanent or temporary, who has put in a minimum of three month’s service is eligible to submit only one essay on any one of the Topics given below. The prizes are distributed during the Annual Railway Award Function held every year.

3. For the purpose of this Competition, Railway Units are required to invite essays from the Officers and Staff and select best 10 percent of the essays, for forwarding to the Board’s Office. The essays are then examined by a Special Committee appointed by the Board.

5. It has been observed that in the Competition held last year, some of the Railways had not sent any entries. Accordingly, it is requested that due publicity may be given for inviting entries for the year 2016-17 from the Railway employees. The selected essays (in triplicate) duly signed and also mentioning on the cover of the Essay – the name, designation, Railway, category (gazetted/non-gazetted), office address and telephone number may be forwarded to the Ministry. of Railways, latest by 22nd February, 2017, so that assessment of the essays and further necessary action in relation to the prize-winning essays may , be completed well in time. In case no essay has been/is selected by your Railway/Office, a ‘NIL’ statement may please be sent.
(S.PAL)
JOINT DIRECTOR ESTT. (GENL.)

1. Role of Social Media in improvement of Railways’ working and its benefits to passengers/users.
2. Digital India and Indian Railways.
3. Swachh Bharat and Swachh Rail.