Streamlining implementation of the NPS as per 7th CPC Recommendation: NC(Staff Side) JCM writes to NPS Committee

Sub: Meeting of the Committee constituted to suggest measures for streamlining implementation of the NPS for the Central Govt. Employees — Reg.

Kindly refer to your aforementioned letter. At the outset, we request you to kindly favour us with a copy of the Government Notification setting up the Committee to make suggestions to streamline the National Pension system for Central Government employees. This is needed for us to understand the scope and ambit of the functioning of the Committee.
The 7th CPC in their report in paras 10.3.11 to 10.3.25 has enumerated the plethora of complaints received by it over the NPS and has finally recommended to the Government to set up a Committee to look into those issues and address. However, we are constrained to believe from the reading of para 3 of the letter cited that the Committee is likely to have only a perfunctory consultation with the stake holders on an important issue like this.
In any case, we give hereunder our views in the matter with the fervent hope that the Committee will consider it within the time constraints.
1. We are of the firm view that the Central Government employees as a whole must be fully excluded from the ambit of the defined contributory pension scheme for otherwise it would create two classes amongst them, one making subscription; and another making no subscription but receiving a better pension and other retirement benefits.
2. There is no justification for the Government to deduct pension contribution from the Central Government employees, even as per the recommendation of the 7th CPC they are provided with far lesser Minimum wage that what it should have been as per the norms of Dr. Aykroyd formula, approved by the 15th ILC and subsequent judgement of the Supreme Court.
3. This apart, we were assured by the Government during the Standing Committee meeting discussions held on 14.12.2007 that
“for employees who had entered with effect from 1.1.2004 are not likely to be worse off vis a vis the current pension system in force as the replacement rate would match to the present one. Thus, NPS is a win-win situation for employees and the Government”.
Without deviating even an iota from our firm position enumerated in No. 1 above, the least the Government must do to honour the assurance given earlier is to guarantee that all Central Govt. employees who are recruited with effect from 1.1.2004 and have thus become mandatory subscribers to the NPS receive all benefits of pension, family pension and other retirement benefits as is provided for under the CCS(Pension) Rules applicable to the Central Government employees who are recruited prior to 1.1.2004.
To illustrate the point that the Central Government employees, who are recruited with effect from 1.1.2004 are provided with a paltry in the form of pension in total disregard to the assurance held out by the Government on 14.12.2007 we enclose herewith the details of pension entitlement computed in the case of a person, who was recruited after 1.1.2004 and retired after 12 years of service in one of the Ordnance factories under the Ministry of Defence. This person is being paid a paltry amount of Rs 9601= p.m. as pension from NPS, whereas after the implementation of the 7 CPC recommendations the minimum pension is Rs 9000/- + DA p.m. with effect from 01-01-2016.
In fine, we feel that it would be better if the Committee could convene a meeting as is convenient to all its members so that a full-fledged discussion could be held on this vital issue which is of utmost importance to a large segment of employees recruited after 01-01-2004 whose number is increasing day by day. 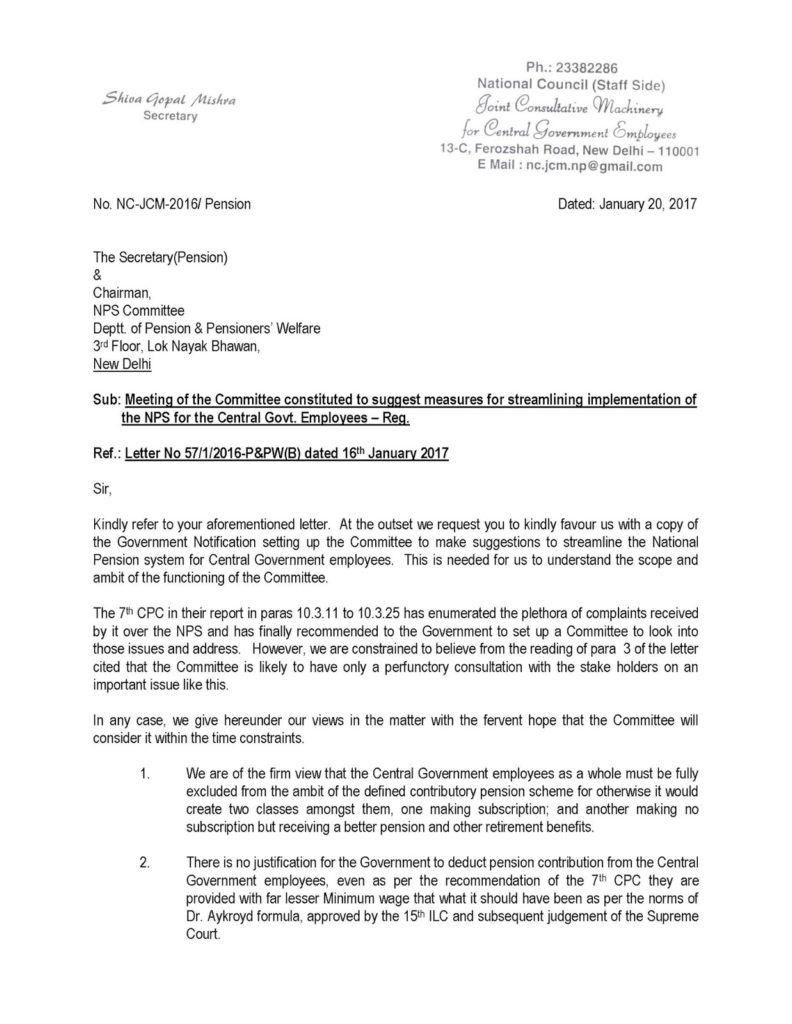 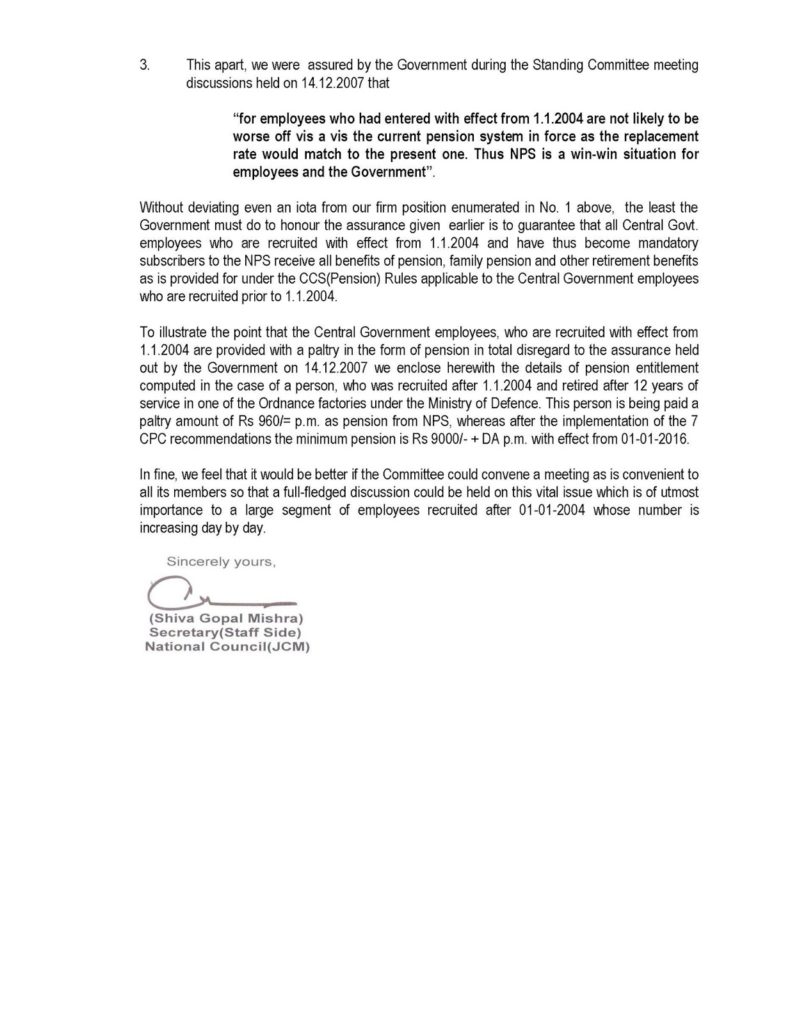