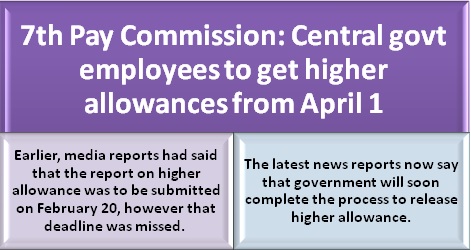 New Delhi: In a good fiscal start for the Central government employees, media reports say that they will get higher allowances according as has been recommended by the 7th Pay Commission recommendations from April 1.
Earlier, media reports had said that the report on higher allowance was to be submitted on February 20, however that deadline was missed. The latest news reports now say that government will soon complete the process to release higher allowance.
The Union Cabinet on June 29 cleared the recommendations of the 7th Pay Commission headed by AK Mathur in respect of the hike in basic pay and pension. However, the decision on 7th Pay Commission suggestions relating to allowances has been referred to a Committee headed by the Finance Secretary.
The 7th Central Pay Commission (CPC) had recommended HRA at the rates initially from 24%, 16%, and 8 % and whenever DA reaches 50% it will be increased to 27%, 18% and 9%, The panel also said that s and when the DA reaches 100% the HRA will be revised to 30% , 20% and 10% for X,Y and Z cities respectively .
The pay commission also recommended doing away with 53 of the 196 allowances and merging a few others.
It is also reported that the committee has proposed to abolish 52 allowances, and subsume 36 allowances into existing allowances or proposed as new one. 12 Allowances are reported to have been proposed to be retained without changes, while the rest of the allowances have been tweaked little.
Read at: Zee News