Kiran Kumari 1 April 28, 2017 3:50 am
CHARTER OF DEMANDS FOR 11TH BIPARTITE SETTLEMENT
ON REVISION OF WAGES AND SERVICE CONDITIONS:
By
BANK EMPLOYEES FEDERATION OF INDIA(BEFI) 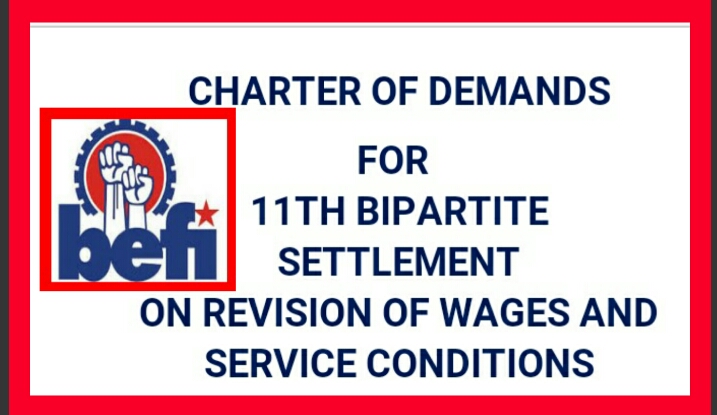 Payment of HRA to employees of Project Area who does not reside in accommodation provided by Bank .

Pension Regulation 1995 clause 39(3)(a)(1) to be amended as follows:
Encashment of leave:
Encashment of Privilege Leave should be increased to 300 days.
Where there is any shortfall under PL, Sick Leave to be allowed for encashment, if available.
Privilege Leave encashment to be permitted in case of loss of job due to punishments/resignations.
Cost on superannuation benefits should be outside and over and above the negotiated wage cost.

Compassionate ground appointments to the family member of the employees who die in harness to be suitably revised without further delay .

14. DEFINITION OF FAMILY AND DEPENDENTS

‘Family’ for the purpose of hospitalization/Leave Fare Concession should include parents/parents-in-law, children, unmarried/widowed/ divorced daughter/sister and physically/mentally challenged son/daughter, brother/sister with disability of 25% or more, who are ordinarily residing with /wholly dependent on the employee.

21. EXPENSES WHILE ON TRANSFERS

Transportation charges on transfer should be reimbursed in full by any mode
Packing charges also be reimbursed.
Hotel accommodation for 6 days with halting allowance on transfer of an employee.
Travel expenses and Joining Time should be allowed to employees on their transferred to another station.
Road transport charges should be revised.