Cabinet to adjudge on 7th CPC revised allowances before April 23

Though nothing concrete has yet been made clear about revised allowances and actual date of implementation of the allowances recommended by the 7th Central Pay Commission, some media reports around it have already made 47 lakh central government employees to go gaga over it.


MCD Poll would not derail implementation of  7th CPC revised allowances by Modi Govt. Paramnews.com team has analyzed the report of National Council Staff Side, “Brief of the meeting held with the Cabinet Secretary on 28.03.2017” displaying on the official website and the “Code of conduct” from Election Commission of India about announcement of Financial Grants in any Form at the time of Polls. After the detailed interpretation which are given below, It can strongly be said that  MCD Poll can not be a hurdle in front of the Govt in implementation of 7th CPC revised allowances. 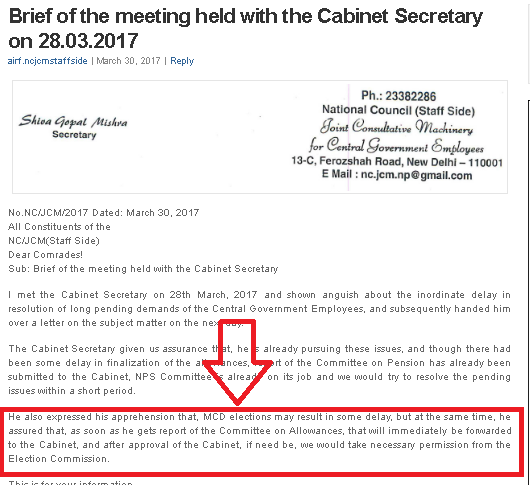 As National Council Staff Side, JCM Secretary Shri Shiva Gopal Mishra has informed through his official website that the meeting of the Committee formed to look into the perks was the last meeting and the committee will submit its report to the cabinet very shortly. Shri S G Mishra also added that the Cabinet Secretary expressed his apprehension that, MCD elections may result in some delay, but at the same time, he assured that, as soon as he gets report of the Committee on Allowances, that will immediately be forwarded to the Cabinet, and after approval of the Cabinet, if need be, we would take necessary permission from the Election Commission.

What is “Code of conduct” from Election Commission of India about announcement of financial grants in any form ?