Kiran Kumari 3 April 30, 2017 5:40 am
Much awaited event for central government employees seems to scour. It is assumed that the central government employees can’t be left to feel disappointed with the final report of revised allowances recommended by the 7th Central Pay Commission that is going to be approved by the cabinet very soon. Empowered Committee of Secretaries (E-CoS) is now to Scan 7th CPC recommendations report submitted by Lavasa Committee, placing before the Cabinet Approval. 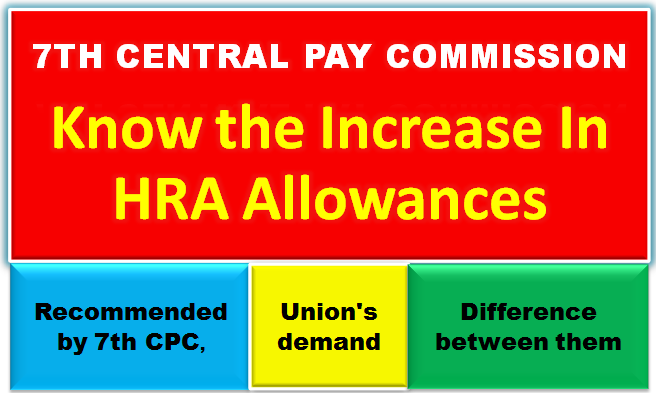 The allowances form a sizeable amount of the salary drawn by a government
employee as union’s demand.

The difference of allowances between 7th CPC recommendations and union’s demand.

The committee on allowances headed by Finance Secretary Ashok Lavasa that was set up to review the recommendations of the Seventh Pay Commission is understood to have finalised its report. Now after review of empowered committee the report will be placed before the cabinet.
The 7th Pay Commission had earlier proposed the rate of House Rent Allowance (HRA)
at 24 percent, 16 percent and 8 percent of the Basic Pay for Class X, Y and Z
cities respectively.
The Commission had also recommended that the rate of HRA will be revised to 27
percent, 18 percent and 9 percent when DA crosses 50 percent, and further
revised to 30 percent, 20 percent and 10 percent when DA crosses 100 percent.
The existing rates of HRA for Class X, Y and Z cities and towns are 30 percent,
20 percent and 10 percent of Basic pay (pay in the pay band plus grade pay).
Assumingly, if the Committee accepts the bare recommendations of A K Mathur-led
7th Pay Commission then the HRA component of central government employees will
increase ranging between 106 percent and 122 percent.
Take, for instance, a central government employee at the very bottom of the pay
scale, where the basic pay (pay of pay band + grade pay) is now Rs 7,000, would
currently be entitled to an HRA of Rs 2,100 in a Class X city. As per 7th Pay
Commission, the new entry level pay at this level is Rs 18,000 per month against
which the new HRA for a Class X city would be Rs 4,320 per month, that is 106
percent more than the existing level.
Similarly, at the highest level of the pay scale, the Cabinet Secretary and
officers of the same rank have a basic pay of Rs 90,000, which means they are
entitled to current HRA of Rs 27,000 in Class X towns. After the revised pay
scale, the new basic pay is Rs 2.5 lakh, for which the HRA would be Rs 60,000,
meaning a hike of 122 percent.
At present, there are as many as 43 lakh central government employees and 53
lakh pensioners who are covered for perks and bonuses under the recommendations
of 6th Pay Commission that will soon be replaced by 7th Pay Commission.