The undersigned is directed to draw attention to the Office Memorandum No 21011/ 1/ 2009-Estt. (A) part dated 13t February 2012 issued by Department of Personnel and Training read with Office Memoranda of even No dated 2oth March 2013 and 15th January 2015 vide which Annual Medical Examination has been introduced for Group ‘A’ officers of Central Civil services of age 40 years and above. The scheme of Annual Medical Examination has been considered by this Ministry in respect of CHS and Dental doctors and it has been decided to introduce the said scheme for CHS and Dental doctors of the age of 40 years and above on the lines prescribed by DoPT in OMs referred above (copy enclosed).
2. The Annual Medical Examination may be conducted in the hospitals empanelled by the Ministry from time to time at the rates of Rs. 2000/- for male officers and Rs. 2200 / – for female officers who visit the hospital / institute with the requisite permission letter from their Competent Authority. The expenditure incurred for this purpose shall be reimbursed by the concerned organization as per the prescribed rate or actual whichever is lower.
3. The list of medical tests for the above purpose is as per Annexure-I. The proforma for Health Check up for CHS and Dental doctors is annexed as Annexure II. The Summary of the Medical Report is to be prepared separately by the Medical Authority in the prescribed format i.e. Annexure III. The summary of Medical Report is to be enclosed by the officer concerned in his APAR.
4. In non CGHS areas, the number of hospitals empanelled under CS (MA) Rules being relatively lower, different offices may identify one or more hospitals locally and refer the officers to such hospitals for medical examination as per the prescribed schedule and rates. State Government hospitals and semi-Govt. / Public Sector Undertaking (PSU) hospitals may also be contacted for the purpose.
(Lalit Kumar)
Under Secretary to Government of India 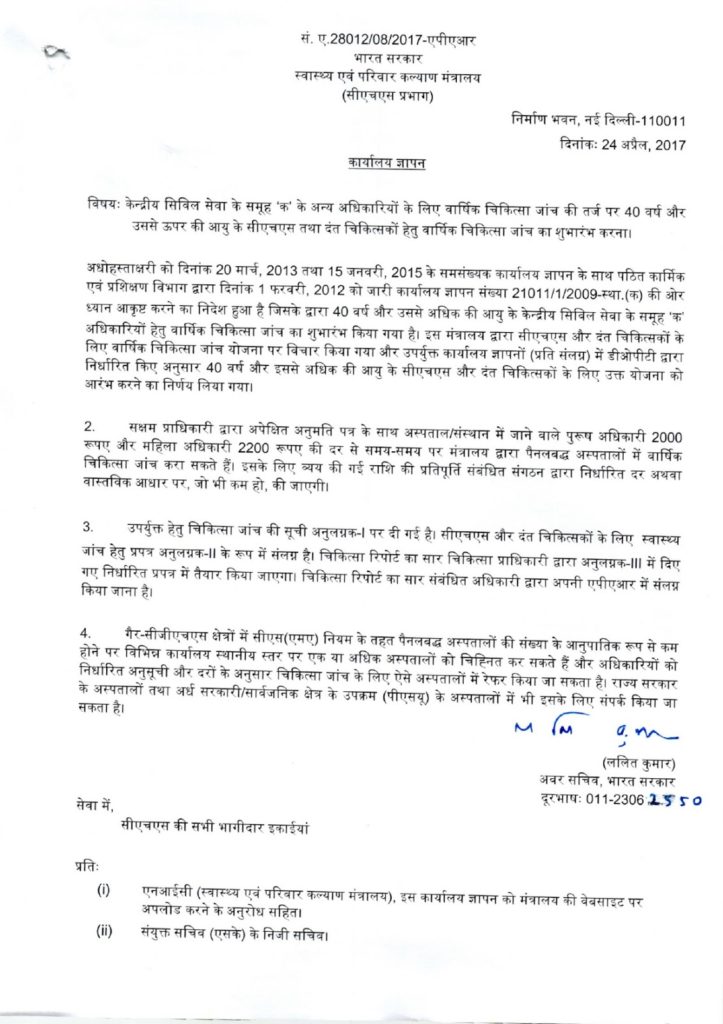