7th CPC Allowances: Cabinet Secretary assures the report would be placed in the next Cabinet Meeting 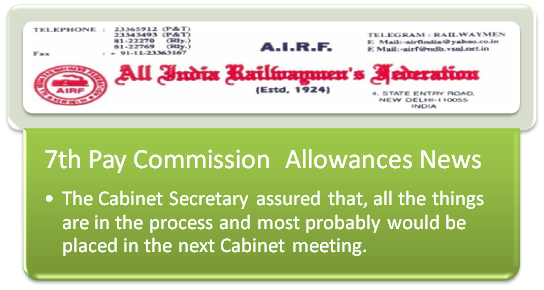 Sub: Brief of the meeting held today with the Cabinet Secretary

Today I met the Cabinet Secretary, Government of India, and shown our anguish regarding non-settlement of demands of the Central Government Employees, particularly non-approval of the allowances by the Cabinet.
The Cabinet Secretary assured that, all the things are in the process and most probably would be placed in the next Cabinet meeting.
Normally, Union Cabinet meets on every Wednesday, but this time 21st June, 2017 being “Yoga Day”, this may defer for one or two days, so according to the assurance given by the Cabinet Secretary, we hope that the matter of the allowances would be settled within this month.
We have also come to know from the reliable sources that the Committee on National Pension System(NPS) has also submitted its report and some serious discussion is on for its implementation.
The Cabinet Secretary also assured that he has discussed the issue of “Very Good” benchmark with the CRB as well as Secretary(DoP&T), where he has advised them that the benchmark should be the same as prevalent in the case of promotion; the same should be for MACP also.

This is for your information.