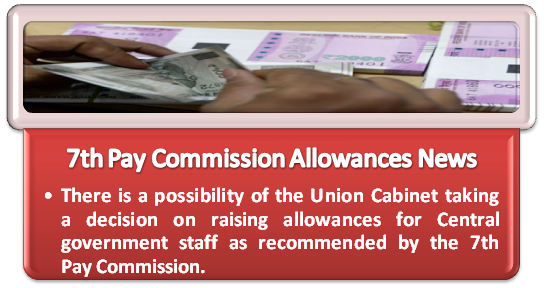 There is a possibility of the Union Cabinet taking a decision on raising allowances for Central government staff as recommended by the 7th Pay Commission.

The Union Cabinet is expected to deliberate on raising allowances for Central government employees when it meets this week, apart from mulling over various options on restructuring national carrier Air India, including privatisation even as unions have warned of protests.
The hike in allowances has been pending for almost two months since the expert panel headed by Ashok Lavasa submitted its report after studying the proposals made by the 7th Central Pay Commission (CPC) in its report submitted in November 2015.
The Lavasa panel had suggested modifications, which were then referred to an Empowered Committee of Secretaries (E-CoS) for final approval by the Union Cabinet.
The CPC examined 196 existing allowances after which it recommended the abolition of 51 and subsuming 37 others with the existing ones. The recommendations of the CPC cover about 47 lakh Central government employees and 53 lakh pensioners, including those at Indian Railways.
What the CPC said on HRA
On HRA, the pay panel had said, “…the Commission recommends that HRA should be rationalised to 24 percent, 16 percent and 8 percent of the Basic Pay for Class X, Y and Z cities respectively.”
“The Commission also recommends that the rate of HRA will be revised to 27 percent, 18 percent and 9 percent when DA crosses 50 percent, and further revised to 30 percent, 20 percent and 10 percent when DA crosses 100 percent,” it added.
A city or town with a population of less than 5 lakh is categorised as “Z”, while the threshold is 5 to less than 50 lakh for “Y”. Cities with a population of 50 lakh or above are classified as “X”.
Employees have demanded a hike of 30 percent, 20 percent and 10 percent, respectively, as against the CPC’s recommendations.
If the HRA is hiked in accordance with the CPC’s recommendations, the additional financial implication on the government exchequer will be Rs 17,200 crore.
Read more at: IBTimes
Follow us on Telegram Channel, Twitter and Facebook for all the latest updates