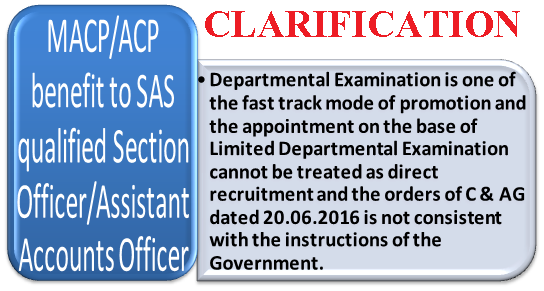 Various reference has been received from different Controllers regarding grant of benefit of ACP/MACP after passing of SAS-ll examination on the basis of CAG Circular No. 23 staff Wing/2016 No. 39 staff(Ent-1) 184-2014 dated 20/06/2016.
In this connection, attention is invited to‘ Para 1 and 9 of Annexure of DOP&T OM No.3534/3/2008-Estt.(D) dated 19th May 2009, which stipulates that
“…..
1) There shall be three financial upgradations under the MACPS, counted from the direct entry grade on completion off 10, 20 and 30 years service respectively. Financial upgradation under this scheme will be admissible Whenever a person has spent 10 years continuously in the same grade pay.
9) Regular service for the purpose of the MACPS shall commence from the date of joining of a post in direct entry grade on a regular basis either on direct recruitment basis or on absorption/re-employment basis. Service rendered on adhoc/contract basis before regular appointment on pre-appointment training shall not be taken into reckoning. However, past continuous regular service in another Government Department in a post carrying same grade pay prior to regular appointment in a new Department, without a break shall also
be counted towards qualifying regular service for the purpose of MACPs only( and not for the regular promotions). However, benefits under the MACPS in such cases shall be considered till the satisfactory completion of the probation period.
…”
Further, it is also intimated that the matter was referred to DoPT, for treating AAO as fresh recruits after passing of SAS Part II Exams and it has been clarified by DOP&T that Departmental Examination is one of the fast track mode of promotion and the appointment on the base of Limited Departmental Examination cannot be treated as direct recruitment and the orders of C & AG dated 20.06.2016 is not consistent with the instructions of the Government. Further, DoPT has opined that treating AAO as a fresh recruits for the purpose of benefit of MACP will be violative of the provisions of RR.
Accordingly, the representations received in this regard may be replied at your end.
(Vishav Jit Gandotra)
For CGDA