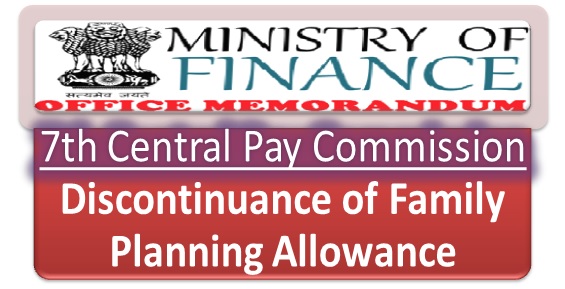 The undersigned is directed to refer to this Ministry’s OM No. 7(20)/2008-E-IIIA dated 24.9.2008 regarding the existing rates of Family Planning Allowance (FPA) admissible to Central Government employees and to say that as provided for in para 7 of this Ministry’s Resolution No. 1-2/2016-IC dated 25th July, 2016, the matter regarding allowances (except Dearness Allowance) based on the recommendations of the 7th Central Pay Commission was referred to a Committee under the Chairmanship of Finance Secretary and until a final decision thereon. all allowances were required to be paid at the existing rates in the existing pay structure (the pay structure based on 6th Pay Commission) as if the pay has not been revised w.e.f. 1st January, 2016. Accordingly, FPA was also required to be paid at the existing rates specified in the aforesaid OM dated 24.9.2008.
2. The decisions of the Government on various allowances based on the recommendations of the 7th Central Pay Commission and in the light of the recommendations of the Committee under the Chairmanship of the Finance Secretary, have since been notified as per the Resolution No. 11-1/2016-IC dated 6th July, 2017
3. As mentioned at Sl. No. 60 of the Appendix -ll of the said Resolution dated 6th July, 2017, the recommendation of the 7th Central Pay Commission to abolish Family Planning Allowance has been accepted and this decision is effective from lsl July, 2017. Accordingly, FPA Family Planning Allowance, as admissible hitherto, shall cease to exist in all cases
4. These orders shall take effect from 1st July, 2017 and hence Family Planning Allowance shall stand discontinued w.e.f. 1st July, 2017.
5. In their application to the employees serving in the Indian Audit & Accounts Department, these orders are issued in consultation with the Office of C&AG.
6. Hindi version of these orders is attached.
sd/-
(Annie George Mathew)
Joint Secretary to the Government of India