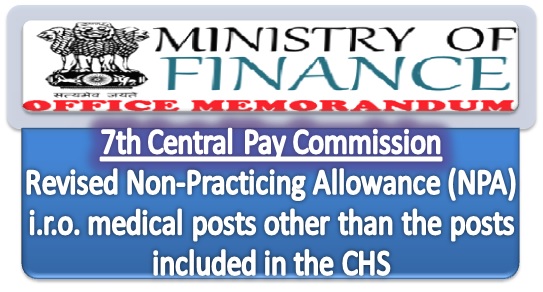 Subject: Revision of rates of Non-Practicing Allowance (NPA) in respect of medical posts other than the posts included in the Central Health Services-recommendations of the 7th Central Pay Commission.

The undersigned is directed to refer to this Ministry’s OM No. 7(19)/2008-E-IIIA dated 30.8.2008 regarding the existing rates of Non-Practising Allowance (NPA) admissible to medical posts other than the posts included in the Central Health Services and to say that as provided for in para 7 of this Ministry’s Resolution No.1-2/2016-lC dated 25th July, 2016, the question of revision of rates of allowances (except Deamess Allowance) based on the recommendations of the 7th Central Pay Commission was referred to a Committee under the Chairmanship of Finance Secretary and until a final decision thereon, all allowances were required to be paid at the existing rates in the existing pay structure (the pay structure based on 6th Pay Commission) as if the pay has not been revised w.e.f. 1st January, 2016. Accordingly, NPA was also required to be paid at the existing rates specified in the aforesaid OM dated 30.8.2008.
2. The decisions of the Government on the revised rates of various allowances based on the recommendations of the 7th Central Pay Commission and in the light of the recommendations of the Committee under the Chairmanship of the Finance Secretary have since been notified as per the Resolution No. 11-1/2016-10 dated 6th July, 2017.
3. Accordingly, the President is pleased to decide that in modification of the existing rates of NPA as contained in the aforesaid OM dated 30.8.2008, the NPA shall now be paid at the rate of 20% of the basic pay in the revised pay structure in vogue based on the recommendations of the 7th Central Pay Commission, as contained in the CCS(RP) Rules, 2016, subject to the condition that the sum of basic pay and NPA does not exceed Rs. 2,37,500 (Rupees two lakh thirty seven thousand and five hundred only). The following conditions shall regulate the grant of NPA under these orders:
(i) The term “basic pay” in the revised pay structure shall mean “basic pay” as defined in Rule 3(x) of CCS(RP) Rules, 2016, Le, “basic pay” in revised pay structure means the pay drawn in the prescribed Level in the Pay Matrix.
(ii) The NPA shall continue to be treated as pay for the purpose of computation of Deamess Allowance and other allowances, except those allowances in respect of which the applicable orders provide otherwise, including calculation of retirement benefits. Deamess Allowance under these orders shall mean dearness allowance as sanctioned by the Central Government from time to time in the 7th Pay Commission-related pay structure.
(iii) NPA shall continue to be restricted to those medical posts for which medical qualifications recognised under the Indian Medical Council Act, 1956 or under the Dentist Act, 1948 have been prescribed as an essential qualification. The following conditions shall also be fulfilled as hitherto:-
(a) The post is a clinical one.
(b) The post is a whole time post.
(c) There is ample scope for private practice, and
4 (d) It is necessary to prohibit private practice in public interest.
4. The revised rate of NPA in terms of these orders shall take effect from 1st July, 2017.
5. In respect of medical posts under the Ministries of Railways, Defence and Department of Atomic Energy, separate orders will be issued by the concerned administrative authorities in these Ministries.
6. Hindi version of these orders is attached.
sd/-
(Amar Nath Singh)
Director
Source: Download original from Finance Ministry website Click here
Follow us on Telegram Channel, Twitter and Facebook for all the latest updates