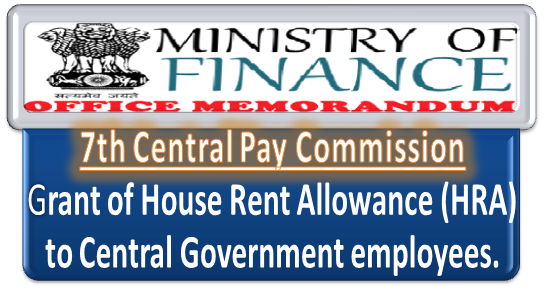 Consequent upon the decision taken by the Government on the recommendations of the Seventh Central Pay Commission, the President is pleased to decide that, in modification of this Ministry’s O.M. “No.2(37)-E.II(B)/64 dated 27.11.1965 as amended from time to time, O.M. No.2(13)/2008-E.II(B) dated 29.08.2008 and OM. No.2/5/2014-E.II(B) dated 21.07.2015, the admissibility of House Rent Allowance (HRA) shall be as under:
2. The rates of HRA will not be less than Rs.5400/-, 3600/- & 1800/- at X, Y & Z class cities respectively.
3. The rates of HRA will be revised to 27% 18% & 9% for X, Y & Z class cities respectively when Dearness Allowance (DA) crosses 25% and further revised to 30%, 20% & 10% when DA crosses 50%.
4. The term “basic pay” in the revised pay structure means the pay drawn in the prescribed pay levels in the Pay Matrix and does not include Non-Practising Allowance (NPA), Military Service Pay (MSP) etc. or any other type of pay like special pay, etc.
5. The list of cities classified as ‘X’, ‘Y’ and ‘Z’ vide DoE’s O.M. No.2/5/2014-E.II(B) dated 21.07.2015, for the purpose of grant of House Rent Allowance is enclosed as Annexure to these orders.
6. Special orders on continuance of HRA at Delhi (“X” class city) rates to Central Government employees posted at Faridabad, Ghazlabad, NOIDA and Gurgaon, at Jalandhar {“Y” class city) rates to Jalandhar Cantt., at “Y” class city rates to Shillong, Goa & Port Blair and HRA at par with Chandigarh ‘(“Y” class city) to Panchkula, SAS. Nagar (Mohali) which have been allowed to continue vide Para .‘4′ of this Ministry’s O.M. No.2/5/2014-E.II(B) dated 21.07.2015 and OM. No. 2/2/2016-E.II(B) dated 03.02.2017, shall continue till further orders.
7. All other conditions governing grant of HRA under existing orders, shall continue to apply.
8. These orders shall be effective from 1st July, 2017.
9. The orders will apply to all civilian. employees of the Central-Government. The Orders will also be applicable to the civilian employees paid from the Defence Services Estimates. In respect of Armed Forces personnel and Railway employees, Separate orders will be issued by the Ministry of Defence and the Ministry of  Railways, respectively.
10. In so far as the persons serving in the Indian Audit and Accounts Department are concerned, these orders issue in consultation with the Comptroller & Auditor General of India.
Hindi version is attached.
(Annie George Mathew)
Joint Secretary to the Government of India
ANNEXURE
To O.M. No.2/5/2017-E.II(B) dated 07.07.2017.

*Only for the purpose of extending HRA on the basis of dependency.

NOTE
The remaining cities/towns in various States/UTs which are not covered by
classification as “X” or ‘Y”, are classified as “Z” for the purpose of HRA.