Sub: Implementation of Govt. decision on the recommendations of the Seventh Central Pay Commission-Revision of Pension of Pre-2016 Pensioners / Family Pensioners etc.

Ref: This office important circular no. C-153, bearing no. G1/C/0199/Vol-1/Tech, dated 12th August 2016.
Attention is invited to above cited circular wherein all Pension Disbursing Authorities (PDAs) were advised to revise the Pension/ Family Pension of all pre-2016 pensioners with effect from 01.01.2016, by multiplying the pension/ family pension as had been fixed at the time of implementation of 6th Central Pay Commission (CPC) recommendations, by a factor of 2.57. The amount of revised pension/family pension so arrived at was to be rounded off to next higher rupee.
2. Now, Govt. Of India, Ministry of P, PG and pension, Deptt. of P&PW has issued further orders vide their OM No. 38/37/2016-P&PW (A), dated 12.05.2017, according to which pension / family pension of all existing defence civilian pensioners, who retired/ died before 01.01.2016, will be revised notionally by fixing their pay in the pay matrix recommended by the 7th CPC in the ‘Level’ corresponding to the pay in the ‘Pay Scale/ Pay Band’ and ‘Grade Pay’ at which they retired/died. This is required to be done by notional pay fixation under each intervening pay commission based on the formula for revision of pay. In this regard,DoPPW,vide,OM No. 38/37/2016-P&PW(A) dt.06.07.2017 has issued concordance table wherein pension of retirees in various pay scales existing over different periods has been indicated.
3. In terms of these orders, the higher of the two formulation i.e. pension/family pension already revised by the PDAs in terms of this office circular No. C-153. dt. 12.08.2016 (i.e. after multiplication by factor of 2.57) or the pension/ family pension as worked out in Para-2 above shall be paid w.e.f. 01.01.2016 to all pre-2006 Defence Civilian Pensioners/ Family Pensioners. Also, Corrigendum PPO, showing revised rate of Basic Pension/Family Pension to be paid w.e.f. 01.01.2016 to all pre-2006 Defence Civilian Pensioners / Family Pensioners, will be issued by this office.
4. These Corrigendum PPOs will be issued in new series of PPO No. which will contain 16 digits including suffix of 4 digits to identify pension type & nature of Corrigendum. Only electronic PPOs will be generated which will be digitally signed. No physical PPOs will be printed and sent to any agency. The new PPO will also contain a QR code wherein all important data will be embedded. This QR code may be used by PDA’s to capture the data. These PPOs will be sent to the Banks through SFTP connectivity which this office has established with various banks. Other banks, with whom there is no SFTP connectivity, are advised to immediately take necessary measures to establish the same. In the interim period till the time they establish SFTP connectivity, PPOs will be sent through email. Similarly, these PPOs will be sent to DPDOs through the CGDA WAN. Director of all treasuries are requested to kindly provide an email ID of .nic or any other domain issued by government for this purpose. A sample copy of such PPO is enclosed for ready reference.
5. PDAs are advised to affect payment based on e-PPO without waiting for any confirmation from respective HOOs. A copy of these PPOs, duly digitally signed, will also be sent through email to Head of offices (HOOs). The respective HOOs may, however check these PPOs and send a copy of the same to the pensioners/family pensioners for their record.
6. PDA’s shall make immediate modification in e-scrolls by inserting a new column (36) wherein the new PPO number containing 16 digits (including suffix of 4 digits) is indicated. In respect of those pensioners who have not been allotted new PPO number, pensioner ID(Which consists of 15 digits) if available in original /corr PPO may be captured and indicated in a different column(column no. 37).
7. Pension Disbursing Authorities are further advised to intimate the status of revision carried out by them in terms of this circular in Annexure-I enclosed herewith to Shri R.K.Sharma, SAO, O I/ C Audit Section, Office of the Principal CDA(P.), Allahabad-211014. A Consolidated soft copy of all such payment in CSV format may be sent in a CD to this office and also be mailed to the email [email protected]
sd/-
(Rajeev Ranjan Kumar)
Dy.CDA (P)

Form of intimation by the Pension Disbursing Authority to the P.C.D.A.(P) regarding revision of Pension in terms of Department of Pension and Pensioners Welfare Office Memorandum No. 38/37/2016-P&PW (A) dated 12.05.2017. 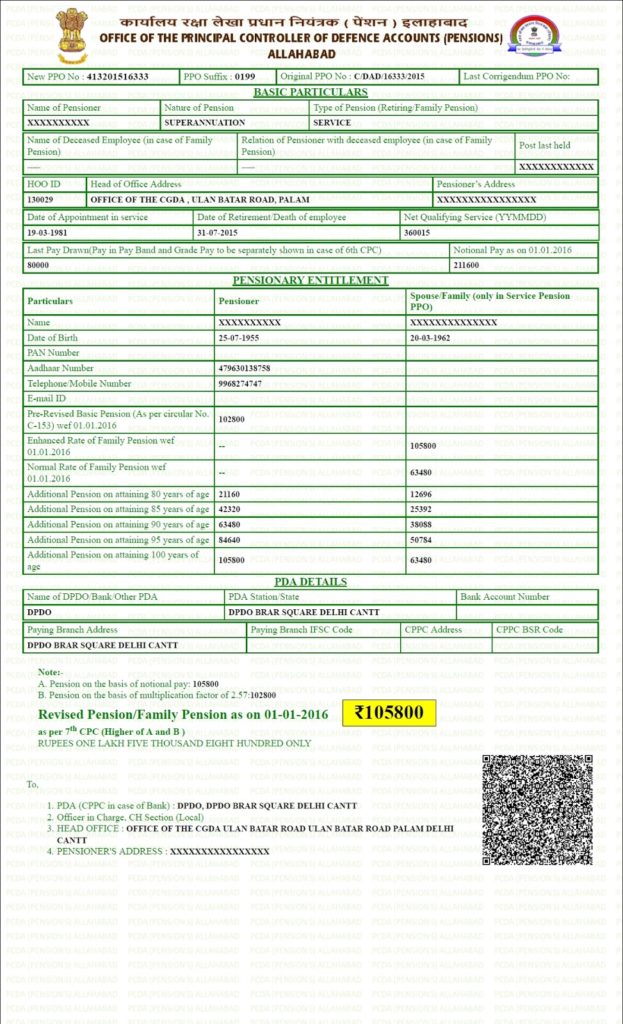