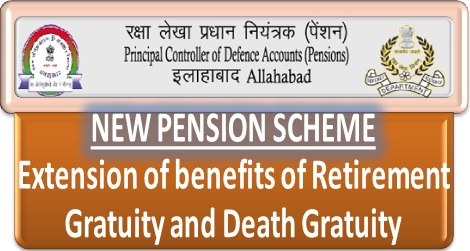 
Benefits of Retirement Gratuity and Death Gratuity to the Central
Government employees covered by New Defined Contribution Pension System
(National Pension System) has been extended vide Govt. of India, Ministry
of PPG & P, Deptt. of P&PW in their

2. The phrase ‘terms and condition’ in the ibid O.M. dated 26.08.2016
refers to the requirement of qualifying service, the rates on which
retirement gratuity is to be paid, the limit of amount of gratuity,
nominations, disciplinary provisions, etc. in the CCS(Pension) Rules. All
these condition would be equally applicable for grant of gratuity to
employees covered under NPS. The decision to extend retirement gratuity and
death gratuity vide the O.M. dated 26.08.2016 is absolute and not
provisional. Separate rules on gratuity for Central Government employees
under NPS would be framed in due course.
3. Now, it has been decided that to submit the claims of above
beneficiaries for Retirment Gratuity and Death Gratuity, the following
procedures shall be adopted by HOO and Pay Audit Controllers:-
i. H.O.O. will prepare a claim in case of NPS beneficiaries going to retire
in accordance with the procedure as prescribed for Defence Civilian
Personnel appointed before 01.01.2004 and will submit the same along with
service boom and all the relevant documents (Which is required in case of
pre 01.01.2004 Cases) to PAO concerned i.e.LAO/RAO. The Permanent
Retirement account No. (PRAN) of the concerned Government Servant Allotted
by National Security Depository limited (NSDL) will also be indicated. In
cases where PRAN has not been allotted by NSDL to a NPS subscriber being
non-effecting account as on 0104.2008, permanent pension account No.(PPAN)
allotted to subscriber will be indicated.
ii. PAO will carry all necessary checks with reference to the entries in
service book and as admissible under the OM No.38/41/06 P&PW (A) dated
05.05.2009 (already circulated under this office circular no.79 dt.
29-10-2010) to ensure that entries made in claim are in as per records in
the service book of the individual. After signing and affixing the seal,
the PAO concerned i.e.LAO/RAO will pass on the claim to the PCDA(P)
Allahabad. The service book will be returned by PAO to HOO concerned.
iii.HOO will also maintain a separate register for recording entries for
PRAN /PPAN No., Name of Government Servant, PPO No. and awards notified.
iv. On receipt of PPO from PCDA(P) Allahabad, HOO will check the same and
after recording the entries in the register retransmit PDA’s copy to PDA,
Pensioner copy to Pensioner and retain

HOO copy for their own record.
v. Other procedures prescribed for pre 01-01-2004 pensioner will also be
followed by the HOO in case of NPS beneficiaries.
4. In view of the foregoing, you also are requested to issue suitable
instructions (along with copy of this circular) to all the Head of Offices
under your administrative control to ensure that claim on the subject
matter henceforth are floated in accordance with instructions given in
above Para.
(Rajeev Ranjan Kumar) 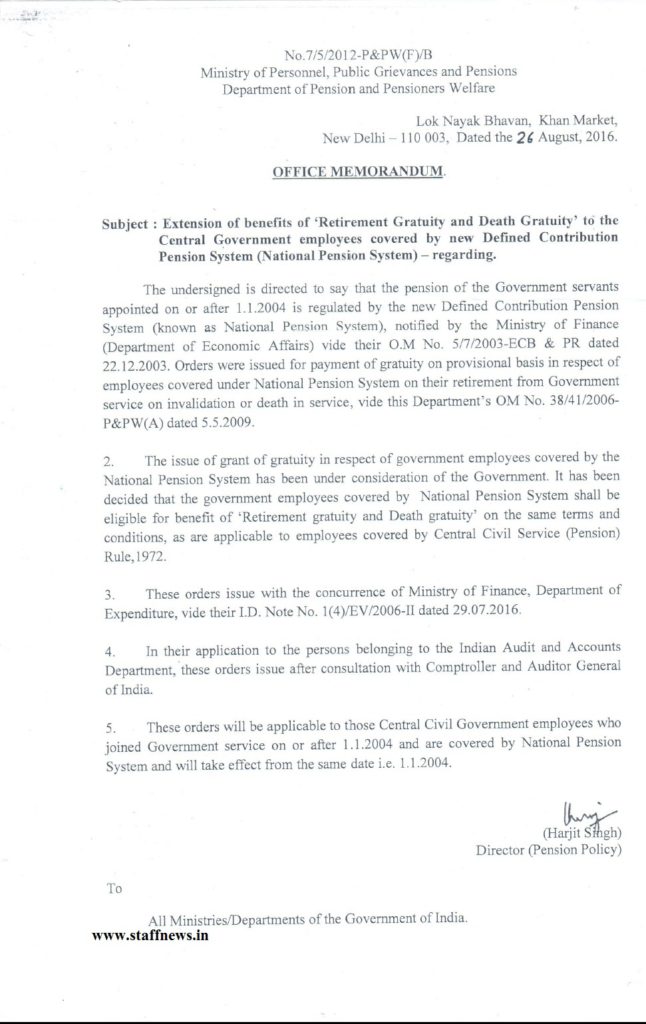