Kiran Kumari 0 August 1, 2017 3:21 am
Revision of Additional Relief on death/disability of Government servants covered under NPS in pursuance of Govt. decision on the recommendation of the 7th CPC
No. 28/03/2017-P&PW(B)
Government of India
Ministry of Personnel, PG. and Pensions
Department of Pension & Pensioners’ Welfare
3rd Floor, LokNayak Bhavan
New Delhi, dated the 30th May, 2017
OFFICE MEMORANDUM

Subject: Revision of Additional Relief on death/disability of Government servants covered under NPS in pursuance of, Govt. decision on the recommendation of the 7th CPC- reg.

The undersigned is directed to refer to Railway Board’s letter No. 2016/F(E)III/1(1)/7 dated 01.05.2017 on the subject mentioned above and to say that the additional. benefit on provisional basis has been extended to the Government employees covered under NPS vide OM. No. 38/41/06-P&PW(A) dated 05.05.2009 in the event of death or invalidation from service on disability. This OM. provides that the the Govt. employees covered under NPS who are discharged on invalidation disablement or the family of such employees who have died during service would be extended the benefit of invalid pension, or family pension in accordance with Rules 38, 49, 50 and 54 of CCS(Pension) Rules, 1972 and CCS(EOP) Rules as the case may be.
2. Any order for revision of pension /family pension sanctioned under the CCS(Pension) Rules, 1972 and CCS(EOP) Rules, would also be equally applicable to the Govt. servants covered under NPS, who have been extended the benefits of old pension scheme in terms of OM. dated 05.05.2009.
(S. Chakrabarti)
Under Secretary to the Government of India 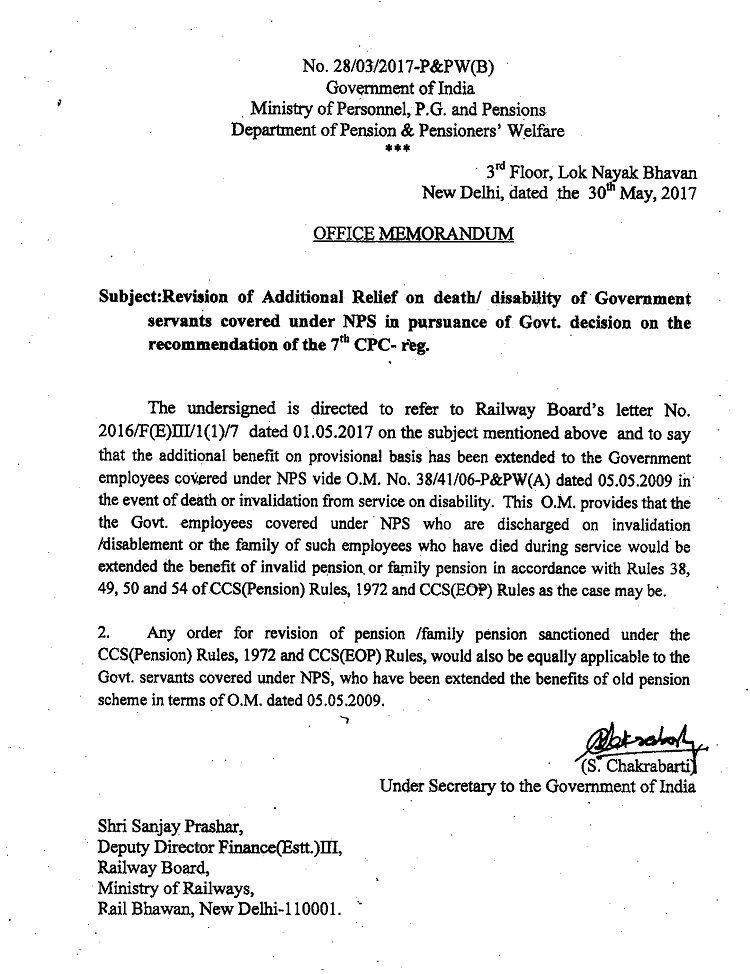 Source: [Click here to get original PDF from FB]

Loading...
Newer Post
Revision of Additional Relief on death/disability of govt servant under NPS in 7th CPC: Railway Board Order RBE No. 78/2017
Older Post
Details of the facilities provided to the personnel of Central Armed Police Forces (CAPF) deployed at borders