In continuation to this office earlier circular of even No. dated 04.12.2013, it is intimated that the clarification as to whether the grant of additional increment should be considered or otherwise for granting bunching benefit to MCM in Ordnance Factories, has been received vide our HQrs. Office letter No. AT/II/2458 (PC) 6/06-IV dated 24/07/2017. A copy of the same is enclosed for your kind information.
It is also intimated that this office earlier circular of even No. dated 04.12.2013 may be treated as cancelled and necessary action may be taken at your end for revision of affected cases.
All Br. AOs under your jurisdiction may please be intimated accordingly.
Enclo: As above
Sd/-
Assistant Controller of Accounts (Fys.)
Office of the Controller General of Defence Accounts
Ulan Batar Road, Palam, Delhi Cantt-110010
No. AT/II/2458 (PC) 6/06-IV
Dated: 24 July 2017
To
The PCA (Fys)
Kolkata

Subject: Clarification on bunching benefit to be extended in Ordnance Factories.

Reference: Your office letter No Pay/Tech-II/04/Vol-LXIII dated 31-05-2017.
In para 4 of your office above cited letter MOF No F. No 1/1/2008-IC dated 12-05-2013 has been referred to, which clarifies that ‘In cases where the stages of fixation of pay in the revised pay band as per fitment table contained in the OM dated 30-08-2008 provides for the same revised stage in the pay band with reference to two consecutive stages of pre-revised pay in the corresponding pre-revised scales, then in such cases due to application of MOF OM dated 19-03-2012, there will be no change in the revised pay as on 01-01-2006, if the revised stage with reference to the pre-revised pay after accounting for one increment in the pre-revised scale-does not undergo any change as per fitment table.
2. However, in the pay fixation case in respect of Shri C. V Mane as put forth in para 3 of your letter, his revised pay is not the same as per the Fitment Table after accounting for one increment in the pre-revised scale. In view, the provisions of MoF OM dated 22-05-2013 does not appear to be applicable in the case of Shri C. V. Mane for not taking into account the additional increment granted in terms of MOF OM dated 19-03-2012 for providing bunching benefit.
Jt CGDA (P&W) has seen.
sd/-
(V K Purohit)
SAO (AT-II)
Source: Click on image to view/download the PDF 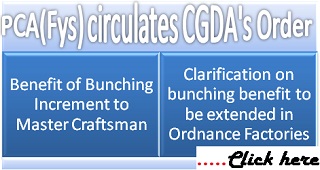