Kiran Kumari 0 August 10, 2017 2:05 am
Doing away with allowances under 7th CPC सातवें केन्द्रीय वेतन आयोग के अंतर्गत भत्तों हटाया जाना
GOVERNMENT OF INDIA
MINISTRY OF FINANCE
RAJYA SABHA
UNSTARRED QUESTION NO-2447
ANSWERED ON-08.08.2017
Doing away with allowances under 7th CPC
2447 . Shri A. K. Selvaraj
(a) whether the Central Government employees will not get Family Planning Allowances;
(b) whether it is a fact that the diet, haircutting and soap toilet allowances given to select categories of employee have been discontinued; and
c) whether it is also a fact that a raft of grants and allocations made to various sections of Government employees have been done away with or revised as per the recommendations of the Committee on Allowances, if so, the details thereof?
ANSWER
FINANCE MINISTER
(SHRI ARUN JAITLEY)
(a): The 7th Central Pay Commission recommended that Family Planning Allowance should be abolished. The Government has accepted the recommendation with effect from 1st July, 2017.
(b): The 7th Central Pay Commission recommended that Diet Allowance granted to deputationists in Bureau of Immigration should be abolished. The 7th Central Pay Commission in paras 8.17.22 to 8.17.24 of its report recommended, inter-alia, that Haircutting Allowance and Soap Toilet Allowance admissible to Personnel Below Officer’s Rank of Defence Forces, as components of Composite Personal Maintenance Allowance(CPMA), should be increased by 50%. The Government has accepted these recommendations with effect from 1st July, 2017.
(c): The Committee on Allowances was set up in July, 2016, to examine the recommendations of the 7th Central Pay Commission pertaining to allowances.
***** 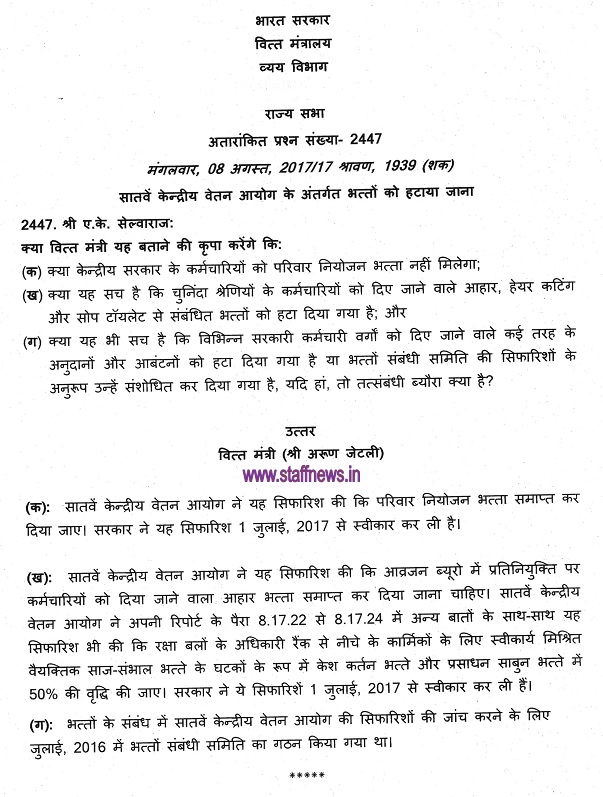