Implementation of 7th CPC in Kendriya Vidyalaya: Instructions for preparation of Paybill of August, 2017

Subject: Pay Bill for the month of August 2017-reg.

I am to invite your attention to KVS(Hq) letter No.11015-3/2017-KVS(Admn.I)/Vol.II dated 03.08.2017 vide which the approval of the Competent Authority for adoption of revised Pay Scales as per the 7th CPC to the employees of Kendriya Vidyalaya Sangathan was conveyed.
It is intimated that while preparing the Pay Bill, the amount of Basic Pay may be mentioned under the coloumn “Pay in Pay Band” and the column of Grade Pay may be left blank till further orders.
As regards allowances, the conditions mentioned under point No.(c) of the letter under reference may be followed meticulously.
Pay bill for the month of August, 2017 may be prepared and uploaded in UBI Salary Portal accordingly within the stipulated time limit.
Yours faithfully,
(M.Arumugam)
Joint Commissioner(Fin) 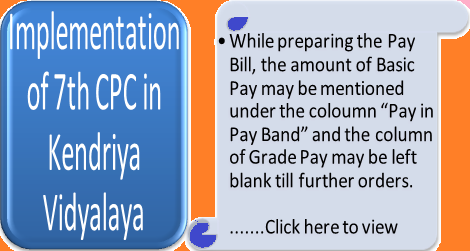