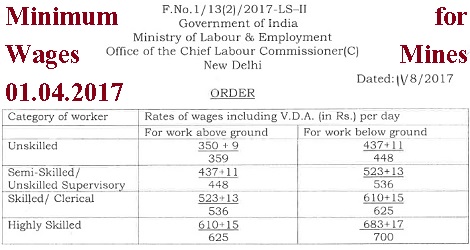 ORDER
In exercise of the powers conferred by Central Government vide Notification No. S.O.2413(E) dated 28th July, 2017 of the Ministry of Labour and Employment the undersigned, hereby, revise the rates of Variable Dearness Allowance on the basis of the average consumer price index number for the preceding period of six months ending on 31.12.2016 reaching 277.5 from 271 (base 2001=100) and thereby resulting in an increase of 6.5 points for Industrial Workers as under. This order shall come into force w.e.f. 01.04.2017.
Rates of Variable Dearness Allowance for employees employed in employments in Gypsum Mines, Barytes Mines, Bauxite Mines, Manganese Mines, China Clay Mines, Kyanite Mines, Copper Mines, Clay Mines, Magnesite Mines, White Clay Mines, Stone Mines, Steatite Mines (including the mines producing Soap Stones and Talc), Ochre Mines, Asbestos Mines, Fire Clay Mines, Chromite Mines, Quartzite Mines, Quartz Mines, Silica Mines, Graphite Mines, Felspar Mines, Laterite Mines, Dolomite Mines, Red Oxide Mines, Wolfram Mines Iron Ore Mines, Granite Mines Rock Phosphate Mines, Hematite Mines, Marble and Calcite Mines, Uranium Mines, Mica Mines, Lignite Mines, Gravel Mines, Slate Mines and Magnetite Mines.
Therefore, the minimum rates of wages including the basic rates and Variable Dearness Allowance payable w.e.f. 01.04.2017 to the employees would be as under:-
The VDA has been rounded off to the next higher rupee as per the decision of the Minimum Wages Advisory board.
The classification of workers under different categories will be same as in Part-I of the notification, whereas classification of cities will be same as in the Part-II of the notification dated 19th January, 2017. The present classification of cities into areas A, B & C is enclosed at Annexure I for ready reference.
Sd/-
(A.K.Nayak)
CHIEF LABOUR COMMISSIONER(C) 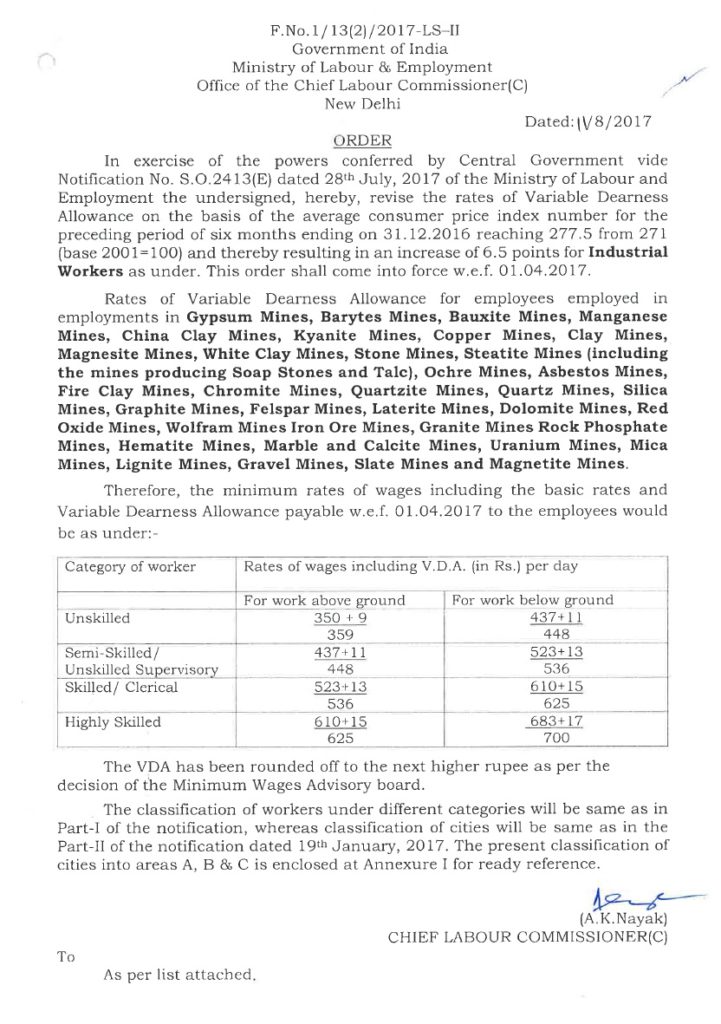