7th CPC Pension Fixation – Anomaly arising from the rejection of Option No. 1 for Pre-2016 Pensioners: Agenda Item for NAC Meeting

Anomaly arising from the decision to reject option
No.1 in pension fixation 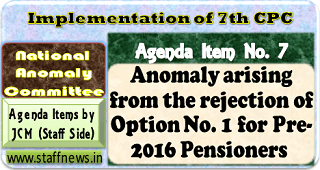 The 7 CPC on considering various demands raised by the employees and Pensioners,
while rejecting most of them at the instance or opinion tendered by the
Department of Pension and Pensioners Welfare as also by the Defence Ministry in
Para 10.1.67 recommended the following formulation for civilian employees
including CAPF personnel who have retired prior to 01.01.2016.
The Govt in its resolution dated 4th August 2016 made its stand on the
recommendation as under:
The doubt over the feasibility of implementation of the said recommendations had
arisen due to the report tendered by the Secretary (Pension). It was no doubt an
unprecedented step taken by Secretary (Pension).
The Govt., unfortunately and unethically too, set up a committee under the
chairmanship of the same Secretary (Pension) to go into the very matter of
feasibility, who had expressed that very doubt at the beginning and prior to the
issuance of the resolution.
The Staff side was provided with an opportunity to represent before the
Committee. They had pointed out that it was feasible to implement the
recommendation with relevant official records that was supposed to have been
kept alive by the Government. The submissions made by the Staff side is annexed.
On the specious plea that the Service Books were not available in respect of all
pensioners, the committee came to the conclusion that the recommendation is not
feasible to be implemented. In fact the committee made a random study on the
availability of the records and came to the conclusion that of the 100 cases
they had taken up, in the case of 86, the relevant records were available. In
other words, the Committee itself found that only 14% of the cases the records,
i.e. the Service Books will not be able to be traced. The very fact that there
are other equally relevant official records from where the requisite information
of the number of years of service the pensioner has put in a cadre/Grade/scale
of pay etc at the time of retirement was available, was not considered by the
Committee. The Committee thus erroneously came to the conclusion that the
recommendation is not feasible to be implemented.
The Committee then went on to suggest an alternative proposal, which was
identical to what the 5th CPC had recommended but not acted upon due to huge
financial outflow by the then Government. The staff side appreciating the fact
that the said recommendation of 5 CPC, if implemented even now will not only
benefit the pensioners but also will be capable of removing certain anomalies
that might arise if option No 1 is implemented in the case of a few pensioners,
suggested that apart from the two options recommended by the 7 CPC, the
Committee’s suggestion could be considered as 3rd Option.
The rejection of the suggestion of the staff side and the recommendations of 7
cpc by the Govt regarding option No. 1 on the ground of “infeasibility” is
untenable and creates a bad precedent in as much as a Govt Servant or a
pensioner is made to suffer financially for the fault of the Govt of not
maintaining the requisite official records for verification. For the fault of
the Govt not having the records, the pensioners or the employees cannot be
punished. The finding that the recommendation is not feasible for implementation
is faulted as the committee itself has come to the conclusion that in 84% of the
cases, the relevant records are available. The decision amounts to denial of
benefit for a vast number of pensioners for the simple reason that in the case
of small segment of pensioners the records are stated to be not available. The
Committee’s findings are also erroneous on the ground that it did not consider
whether alternate documents other than Service Books are available from where
the claim of the pensioner could be verified.
From the above, it could be seen that Govt’s decision not to implement
option No 1 recommended by 7 CPC is flawed and based upon factually erroneous
premises and constitutes a clear cut anomaly. The said decision of the Govt
requires to be revisited and pensioners given the benefit of option No 1.
We give a chart indicating the financial loss suffered by pensioners on account
of the Govt decision in not implementing the recommendation of 7 CPC concerning
option No 1.
Comparison of Basic Pension – option I vis-à-vis new Formula

In fine, we request that:

The Pensioners/family pensioners may be allowed to choose any one of the
following three options;
(a) 2.57 time of the present pension if that is beneficial.
(b) Option No.1. Recommended by the 7th CPC, if that is beneficial for
them.
(c) To determine the Pension on the basis of the suggestion placed by the
Pension Department on 6.10.2016 i.e. extension of pension determination
recommended by the 5th CPC (viz. arriving at notional pay in the 7th CPC by
applying formula for pay revision for serving employees in each Pay Commission
and consequent pension fixation) to all pre-2016 Pensioners/family pensioners,
if that becomes beneficial to them.
Click on image to View All Agenda Items for NAC by JCM 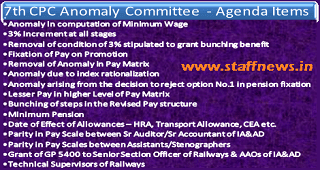