Subject: Recommendations of the 7th Central Pay Commission-Revision of rates of Annual Allowance in respect of Central Health Service Officers.

The undersigned is directed to refer to the subject cited above and to say that the Seventh Central Pay Commission has recommended to raise Annual Allowance by 50 percent. The amount will further rise by 25 percent each time DA rises by 50 percent. Consequent upon acceptance of recommendations of the Seventh Central Pay Commission by the Government, the President is pleased to decide that hereafter the officers of Teaching, Non-Teaching, Public Health sub-cadres and General Duty Medical Officers having PG qualification recognized under Indian Medical Council Act, 1956 will be granted Annual Allowance at the rate of Rs.2250 /- p.m. (Rupees Two Thousand Two Hundred and Fifty per month). The General Duty Medical Officers who do not possess any Post Graduate qualification or who may possess unrecognized PG qualification will be granted Annual Allowance at the rate of Rs. 1350/- p.m. (Rupees One Thousand Three Hundred and Fifty per month). These revised rates of Annual Allowance will be subject to the following condition:-
‘At the end of financial year, each Specialist / General Duty Medical Officer will be required to furnish a certificate to the effect that the amount of Annual Allowance has been utilized for the purpose it was drawn. In the case of retirement/ resignation before the end of the financial year, such a certificate will be furnished at the time of such retirement / resignation.’
2. The rates of. these allowances will be increased by 25 % each time the Dearness Allowance payable on revised pay scale rises by 50%.
3. This order will take effect from 01.07.2017.
4.This issues with the concurrence of Department of Expenditure, Ministry of Finance vide its I.D No.300347034/2017 (F.No. 19062/01/2017-E.IV) dated 17.08.2017.
Sd/-
(Sitansu Mohan Routray)
Under Secretary to the Govt. of India 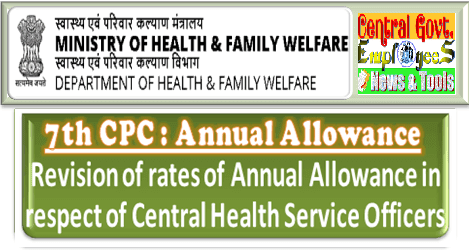 Bikash De: Please share the authentic source of this OM. This OM is not available in the official website of DOP&PW. We have doubt on authenticity of this OM.

Satyavir Singh: echs site not working, as dependent life certificate and income certificate could not be on line, whereas, it should be on line before 31 Oct 2022. Please clarify the same on which site be online. specify the name of site.