7th Pay Commission: Minimum pay may be hiked but when? Here is what employees can expect

Kiran Kumari 1 November 6, 2017 2:10 am
7th Pay Commission: Minimum pay may be hiked but when? Here is what employees can expect
7th Pay Commission Minimum Pay Hike: Some news reports even claimed that the minimum pay will be hiked to Rs 21,000 from Rs 18,000. But, the million dollar question – When will it happen? 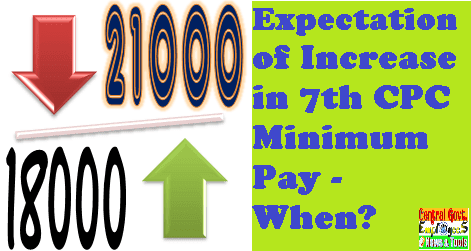 A lot number of news reports have been claiming that the minimum pay may be hiked under 7th Pay Commission for Central government employees. Some news reports even claimed that the minimum pay will be hiked to Rs 21,000 from Rs 18,000. But, the million dollar question – When will it happen? Reportedly, Narendra Modi government wants this to happen by January 2018, as per OneIndia. Earlier, it was reported that Narendra Modi government has finally given a green signal for the hike in minimum pay and fitment factor of the Central government employees. This was a big news for Central government employees. After this, National Anomaly Committee (NAC) and Department of Expenditure will take a final call on the matter. NAC has got the nod from the government to increase minimum salary and fitment factor, according to a report in Jansatta. Now, it is being expected that the minimum salary will go up to Rs 21,000 from Rs 18,000.
National Anomaly Committee (NAC)
NAC was formed to look into various pay related anomalies arising out of the implementation of the Seventh Central Pay Commission’s recommendations. The 22-member panel is being headed by Secretary, Department of Personnel and Training (DoPT) and has members of both the official and staff side.
“It has been decided to set up the anomaly committee of the National Council (Joint Consultative Machinery) consisting of representatives of the official side and the staff side to settle any anomalies arising out of the implementation of the Pay Commission’s recommendations,” an order issued by the DoPT had said.
On June 28, in a bonanza to 48 lakh central government employees, the Union Cabinet had approved recommendations of 7th Central Pay Commission with 34 modifications. The increased allowances came into effect from July 1, 2017, is based on the recommendations of the Committee on Allowances (CoA).
Read at: http://www.financialexpress.com