Enhancement in the rate of Special Pension to Blinded Ex-Servicemen : PCDA Circular No. 587

Kiran Kumari 0 November 2, 2017 4:46 am
Enhancement in the rate of Special Pension to Blinded Ex-Servicemen : PCDA Circular No. 587
Office of the Principal CDA(Pensions)
Draupadi Ghat, Allahabad
Circular No. 587
Dated: 06th October, 2017

Subject: Enhancement in the rate of Special Pension to Blinded Ex-Servicemen under AO 606/75.

Reference: This office Circular No. 295 dated 03.01.2002.
-*-*-
Copy of GOI, MoD letter No. 1(10)/2009-D(Pen/Policy) dated 29th August’ 2017 on the above subject, which is self-explanatory, is forwarded herewith as annexure to this circular for further necessary action at your end.
2. In terms of Para-1 of GOI, MOD letter dated 8th Iune’ 2017, the rate of Special Pension to Blinded Ex-Servicemen under AO 606/75 has been enhanced from ₹ 500/- pm to ₹ 4000/- pm with effect from June, 2017.
3. In View of the sanction of the GOI, MOD, the enhanced rate of ₹ 4000/- pm as admissible to Blinded Ex-Servicemen w.e.f. June’ 2017 may be revised and paid on the authority of this circular.
4. This circular has been uploaded on this office website www.pcdapension.nic.in for dissemination to all alongwith Defence pensioners and Pension Disbursing Agencies.
No. 161/KSB/Policy/SPL PEN/C
Government of India
Ministry of Defence
Department of Ex-Servicemen Welfare
New Delhi, Dated  8th June, 2017
The Controller General of
Defence Accounts, (CGDA)
New Delhi.
Subject: Enhancement in the rate of Special Pension to Blinded fix-servicemen under AO 606/75.
Sir,
In supersession of Government of India, Ministry of Defence letter No. I2-SB(8)/52-2001/58/D(Res) dated 16th Nov.2001, I am directed to convey the sanction of the President to enhance the Special Pension to blinded lix-Servicemen from Rs. 500/- pm. to Rs. 4000/- per month with effect from June, 2017. The expenditure will he debited to relevant Head of account of Defence Services Estimates.
2. The sanction is issued with the concurrence of Ministry of Defence (Fin/Pen) vide their ID No 10(12)/2016/FIN/PEN dated 05/06/2017.
Yours faithfully,
(A. K. Pandey)
Undcr Secretary to the Government of India
Source: Click on image to view/download the original PDF 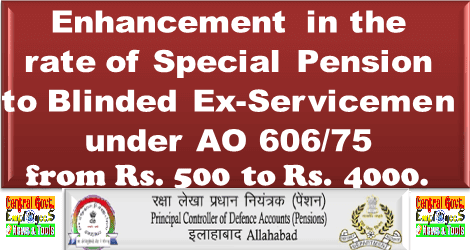