House Rent Allowance in the event of non-acceptance or surrender of railway residential accommodation: RBE No. 05/2018

Sub : Admissibility of House Rent Allowance in the event of non-acceptance or surrender of railway residential accommodation.

Attention is invited to Board’s letters quoted above delegating powers to the General Managers and other Heads of Organisations directly controlling allotment of quarters to Railway Servants for sanction of House Rent Allowance in accordance with the prescribed conditions to the categories of Railway Employees specified therein. This delegation of powers was valid upto 31.03.2017.

2.The question of renewing this delegation of powers beyond 31.03.2017 has been engaging the attention of the Board. On the basis of the reports received from the Zonal Railways and Production Units, the matter has been considered and the Board have decided to renew the sanction contained in para 5 of their letter dated 16.5.1988 ibid and as amended/modified from time to time, w.e.f 01.04.2017 upto 31.03.2024 where after the question of renewing this delegation will be considered by the Board and a fresh sanction, if necessary, issued on the basis of reports received from the General Managers etc., directly controlling allotment of quarters, in regard to the position of availability of Railway accommodation under their control.

3. In case at any point of time it transpires that some accommodation is likely to remain vacant/un-occupied due to lack of demand, it should be made compulsory to submit applications for such types where there is surplus accommodation, and consequently, the employees entitled for such types would not be eligible to draw House Rent Allowance.

4. This delegation is also subject to the over-riding, condition that these orders are liable to be withdrawn/modified at any time during this period, if it is considered necessary by the Board to do so.

5. This has the approval of the President and issues with the concurrence of the Finance Directorate of the Ministry of Railways. 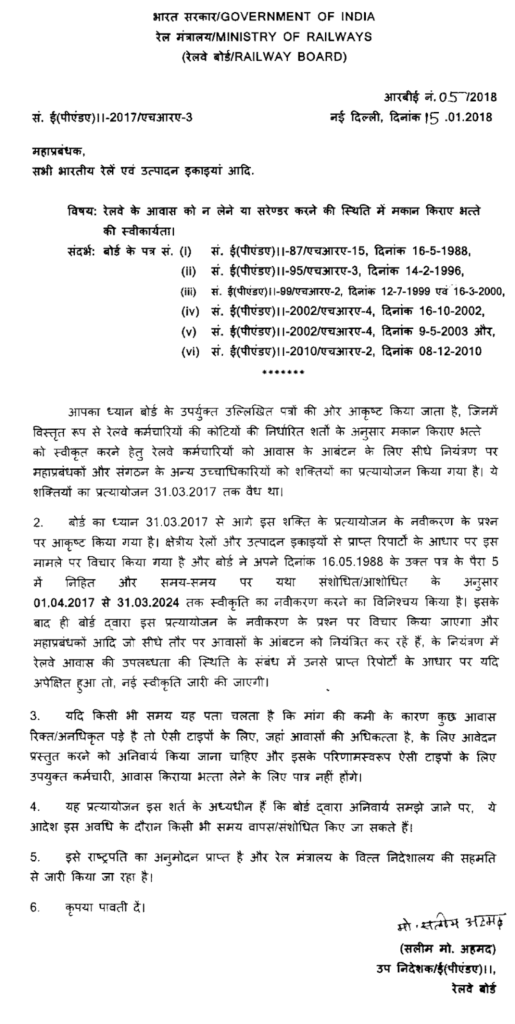 Loading...
Newer Post
Extension of the period of retention of Railway accommodation at the previous place of posting for one year upto 31.12.2018
Older Post
Recording of higher academic/educational qualification in the Service Record of employees recruited through RRBs: RBE No. 07/2018