Sub: Implementation of Government’s decision on the recommendations of the
Seventh Central Pay Commission on revision of provisions regulating
Pension/Gratuity/Commutation of Pension/Family Pension including pensionary
awards notified in terms of casualty pensionary awards Fixation of Pension
of Commissioned Officers of Army Medical Corps/Army Dental Corps/Remount
& Veterinary Corps retired during 1.12016 to 30.6.2017.

Sir,
The undersigned is directed to refer to this Ministry’s letter No.
17(02)/2016/D(Pen/Pol) dated 4th September, 2017. In accordance with Para
4.1.1 of said letter, the emoluments reckoned for calculation of pension
include Non Practicing Allowance (NPA) granted to Medical officers of Army
Medical Corps /Army Dental Corps / Remount & Veterinary Corps.
2. For Medical Officers of Armed Forces who have retired from 1.12016 to
30.6.2017, their pension is based on emoluments which included NPA @ 25% of
the pre-revised pay. Orders have been issued by Ministry of Defence vide
letter No. 4(10)/2017/D(Med) dated 28th September,2017 for grant of NPA to
serving medical officers @ 20% of basic pay w.e.f. 1.7.2017. Accordingly,
the medical officers retired/retiring on or after 1.7.2017 are entitled to
pension based on emoluments which include NPA at the rate of 20% of the
revised basic pay.
3. The matter regarding revision of pension the Medical Officers of Armed
Forces who retired during 1.12016 to 30.6.2017 based on revised rate of NPA
has been examined by the Government. It has been decided that all kind of
pension/family pension in respect of Medical officers of Armed Forces who
retired/died during 1.12016 to 30.6.2017 and were drawing NPA at old rates
on the date of retirement/death, shall be further revised w.e.f. 1.7.2017
by adding NPA @ 20% to the basic pay on the date of retirement. The
fixation of pension/ family pension of retired Medical officers of
AMC/ADC/RVC in the above manner, shall be further subject to the condition
that emoluments (i.e. Basic Pay MSP + NPA) to be reckoned for pension do
not exceed Rs. 2,37,500/- (Rupees two lakh thirty seven thousand and five
hundred only). Amount of Gratuity and CVP which has already been notified,
shall remain unchanged.
4. This issues with the concurrence of Ministry of Defence(F1nance/Pension)
vide their ID No. 10(8)/2018/Fin.Pen dated 11.05.2018.
5. Hindi version will follow.
Yours faithfully,
Sd/-
(Manoj Sinha)
Under Secretary to the Government of India 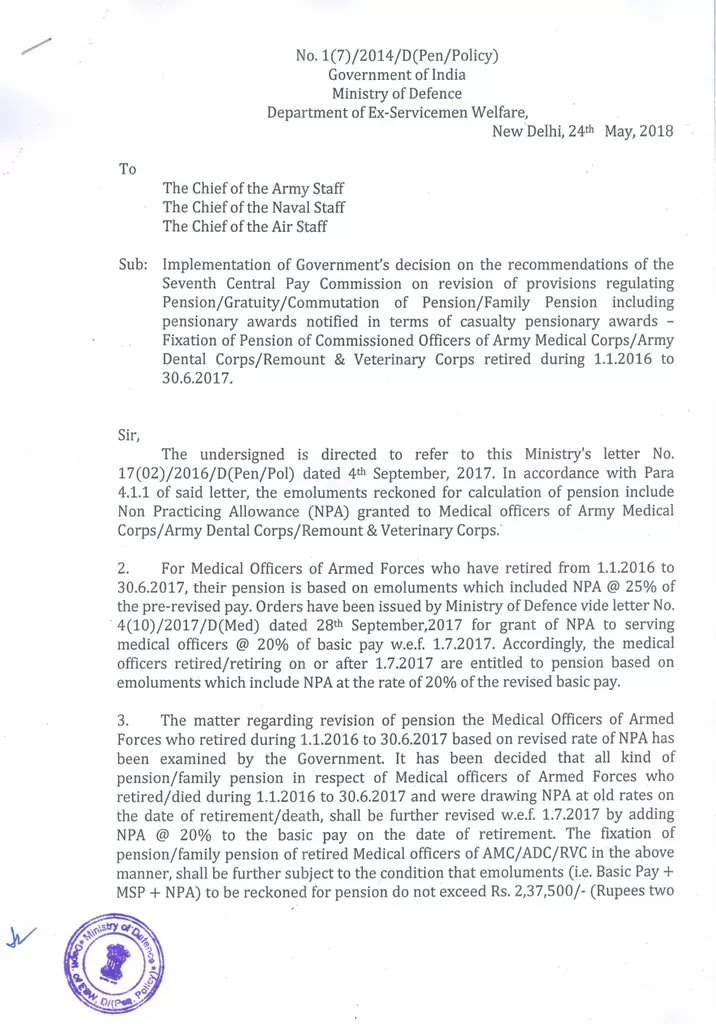 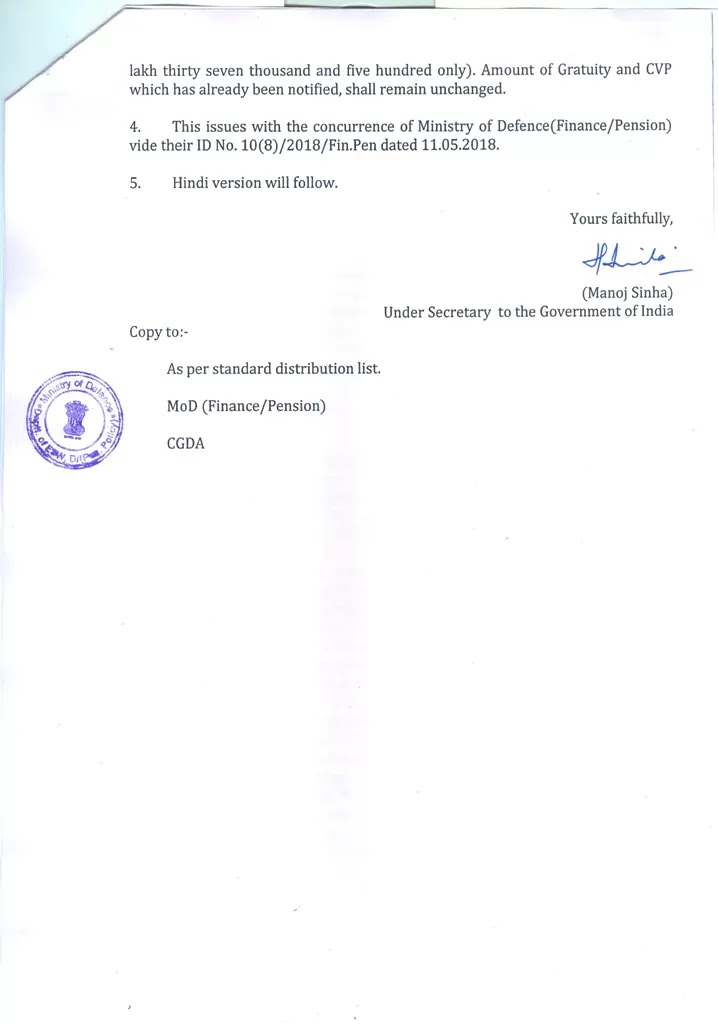