The undersigned is directed to refer to this Ministry’s Office Memoranda of even number dated 31.05.2007, 29.08.2007 and. 02.08.2010 vide which the entitlement of the son of a CGHS beneficiary beyond the age of 25 years was conveyed. As per the two Office Memoranda under reference, it was indicated that an unmarried son of a CGHS beneficiary suffering from any permanent disability of any kind (physical or mental) will be entitled to CGHS facility even after attaining the age of 25 years.
2. Since then this Ministry is in receipt of several representations for inclusion of more conditions in , view of modification to the PWD Act, 1995 by “The Rights of Persons with Disabilities Act, 2016 (Act No. 49 of 2016)” as notified by WHO Law and Justice, Govt. of India on 27.12.2016. The matter has been reviewed by the Ministry and it is now decided that for the purpose of extending the CGHS benefits to dependent unmarried son of CGHS beneficiary beyond 25 years of age , the definition of ‘Permanent Disability’ shall include the following conditions:
I. Physical disability:

A. Locomotor disability including
a) Leprosy cured person– suffering from loss of sensation in hands or feet as well as loss of sensation and paresis in the eye and eye-lid but with no manifest deformity or suffering from manifest deformity and paresis or having extreme physical deformity as well as advanced age which prevents him/her from gainful occupation
b) Cerebral palsy – caused by damage to one or more specific areas of the brain usually occurring before, during or immediately after birth.
c) Dwarfism– a medical genetic condition resulting inLan adult height of 147 cms or less;
d) Muscular dystrophy – a. group of hereditary genetic muscle diseases characterized by progressive skeletal muscle weakness
e) Acid attack victims – disfigured due to‘ violent assaults by throwing acid or similar corrosive substance
B. Visual impairment:

a) Blindness – where a person has any of the following conditions alter best correction:
(i) Total absence of sight or
(ii) Visual acuity less than 3/60 or less than 10/200(Snellen) in the better eye with best possible correction
(iii) Limitation of field of vision subtending an angle of less than 10 degree
b) “Low vision” means any of the following conditions:
(i) visual acuity not exceeding 6/18 or less than 20/60 upto 3/60 upto 10/200 (Snellen) in the bettereye with best possible corrections; or
(ii) limitation of the field. of vision subtending an angle of less than 40 degree upto 10 degree
C. Hearing Impairment
(a) “deaf” means persons having 70 db hearin g loss in speech frequencies in both ears;
(b) “hard of hearing” means persons having 60 db to 70 db hearing loss in speech frequencies in both ears;
D. “Speech and Language disability” – permanent disability arising out of conditions such as Laryngectomy or aphasia affecting one or more components of speech and language due to organic or neuronal causes.
II. Intellectual disability– characterized by significant limitation both in intellectual functioning (reasoning, learning, problem solving) and in adaptive behavior , which cover a range of every day, social and practical skills , including, social and practical skills , including-
(a) “Specific language disabilities” a heterogeneous group of conditions Wherein there is deficit in processing language, spoken. or written, that may manifest itself as a difficulty to comprehend, speak, read, write, spell, or to do the mathematical calculations and includes conditions such as perceptual disabilities, dyslexia, dysgraphia, dyscalculia, dyspraxia and developmental aphasia
(b) “Autism spectrum disorder” – a neuro-developmental disorder typically appearing in the first three years of life that significantly affects a person’s ability to communicate, understand. relationships and relate to others, and frequently associated with unusual or stereotypical rituals or behaviour.
III. Mental behaviour
“Mental illness”- a substantial disorder of thinking, mood, perception, orientation or memory that grossly impairs judgement, behaviour, capacity to recognize reality or ability to meet the ordinary demands of life, but does not include retardation.
IV. Mental Retardation
V. Disability caused due to

(a) Chronic neurological conditions such as
(i) Multiple Sclerosis
(ii) Parkinson’s disease
(b) Blood disorder
(i) Haemophila
(ii) Thalassemia
(iii) Sickle Cell Disease
VI. Multiple Dis-abilities ( more than “one of the above disabilities)– including deaf blindness
3. Bench Mark Disability– unmarried permanently disabled and financially dependent sons of CGHS beneficiaries suffering 40% or more of one or more-disabilities as certified. by a Medical Board shall be eligible to avail CGHS facilities even after attaining the age of 25 years.
4. This OM will. be effective from the date or its issue.
Sd/-
(Rajeev Attri)
Under Secretary to the Govt. of India 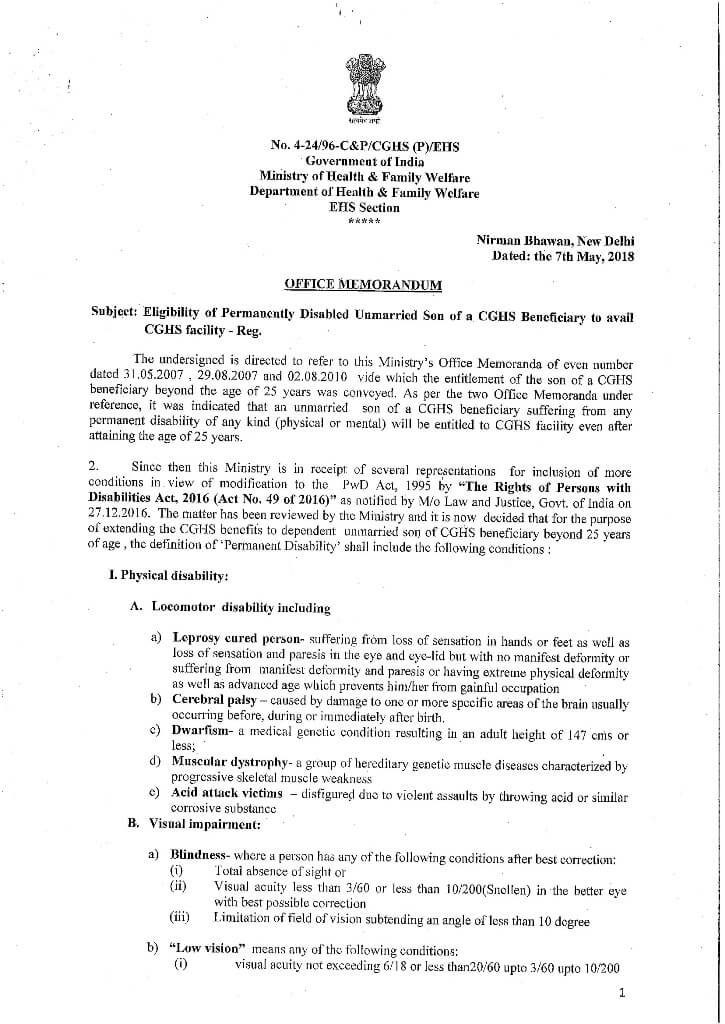 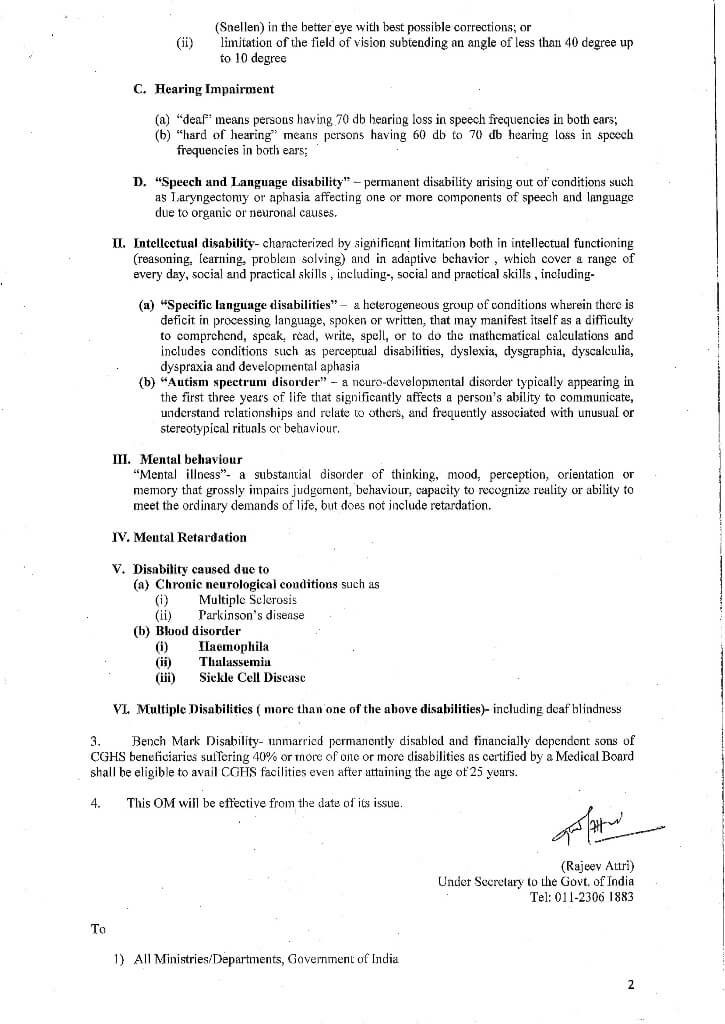