Kiran Kumari 0 July 15, 2018 4:00 pm
7th CPC – National Anomaly Committee Meeting on 17-7-2018
Government Employees are eagerly waiting to resolve their pay anomaly arisen after the implementation of recommendations of Seventh Pay Commission.  Recommendations of Seventh CPC had implemented in two steps in first step the basic pay and DA were revised with the implementation of new Pay matrix vide notification in August, 2016 and nearly a period of two years has been spent.
The National Anomaly Committee Meeting scheduled to be held on 17.7.2018 might be a knee jerk reaction to the NJCA’s Letter.  Recently NJCA had written a letter to Cabinet Secretary, GOI regarding the Long Pending issues like Minimum Pay, NPS and Pension Issues. NJCA has expressed its concerns in the letter and  informed the Central Government that if the issues are not addressed they would be forced to revive their deferred Indefinite Strike action.  In a sudden development after this letter, the Government decided to hold the meeting of National Anomaly Committee on 17-7-2018.
Let us wait for the outcome of the Meeting !
Staff side
MEETING NOTICE
F.No.11/2/2016-JCA (Pt)
Government of India
Ministry of Personnel, PG & Pensions
Department of Personnel & Training
Establishment (JCA-2) Sect,.
North Block, New Delhi
Dated July 13,2018
Meeting Notice

Subject: Meeting of the National Anomaly Committee -regarding.

2. Kindly make it convenient to attend the meeting. 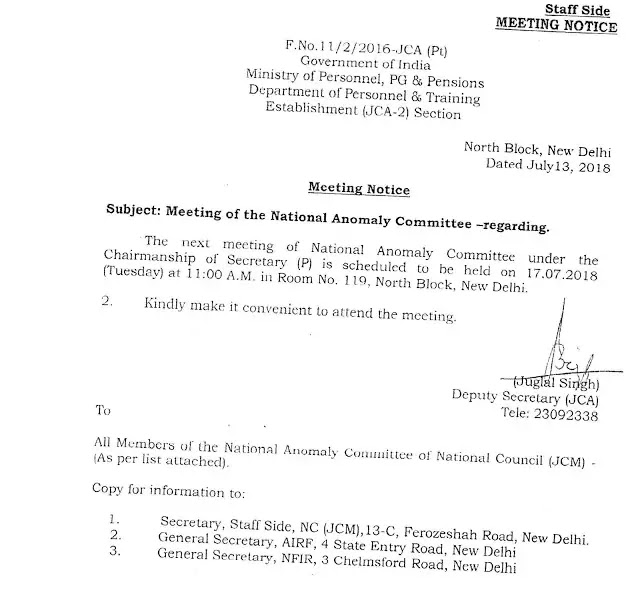