Kiran Kumari 0 August 6, 2018 2:43 am
Inclusion of a Parent as well as “Medical Attendant” in Special Passes issued on medical grounds in favour of minor children of railway employees.
RBE No.:104/2018
ADVANCE CORRECTION SLIP No.:77
Government of lndia
Ministry of Railways
(Railway Board)
No.E(W)2015/PS5-1/1
New Delhi, dated 03.08.2018
The General Managers (P)
All Zonal Railways &
Production Units.

Sub: Inclusion of a Parent as well as “Medical Attendant” in Special Passes issued on medical grounds in favour of minor children of railway employees.

In the PNM/AIRF Meeting with Board, the Federation had raised the issue regarding non-inclusion of a parent in the Special Passes issued for outstation medical treatment of children of railway employees due to absence of necessary provision in the extant Pass Rules.
2. The issue has been examined in detail and in order to obviate the difficulties in such cases, it has been decided with the approval of the Competent Authority to incorporate the following provision in Schedule VII (Special Passes) of the Railway Servants (Pass) Rules, 1986 (Second Edition- 1993) as item No.5 (below Note of Item No.4) under Column 3.‘Entitlement/facilities’:-
“5. In case of minor children (i.e. boys under the age of 15 years and girls under the age of 18 years), if referred to outstation hospitals for medical treatment, Special Passes in favour of

(i) railway servant or his/her spouse,
(ii) minor child requiring treatment and
(iii) a Medical Attendant (who may be a family member or dependent or any other person) will be issued.
The pass will ordinarily be issued for the class of entitlement of the railway servant on privilege account or in higher class, if otherwise admissible under these rules.”
3. This issues with the concurrence of Finance Directorate of Ministry of Railways.
(V. Muralidharan)
Dy. Director Estt.(Welfare)-1
Railway Board 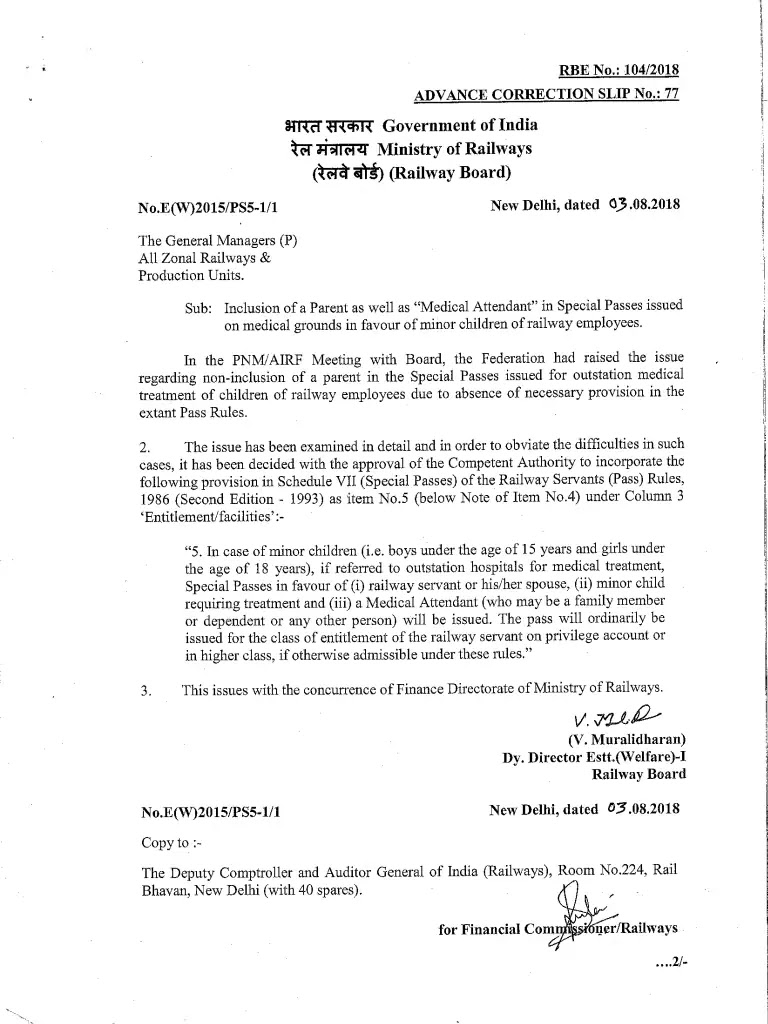 Loading...
Newer Post
Issue of Medical ID Card to Retiring Employees at the time of retirement or before
Older Post
Dearness Allowance for Workmen and Officer Employees in banks for the months of Aug, Sep & Oct 2018