Kiran Kumari 0 December 18, 2018 2:22 am
Non-functional scale to Group ‘B’ Officers of Organised Service after completion of 4 years, Procedure, Pay Fixation, Illustration: Railway Board Order
RBE No. 192/2018
GOVERNMENT OF INDIA
MINISTRY OF RAILWAYS
(RAILWAY BOARD)
No. E(GP) 2003/2/22
New Delhi, dated: 12.12.2018
The General ‘Managers,
All Indian Railways and Production Units

Sub: Grant of Non-functional scale to Group ‘B’ Officers of Organised Services on 100% basis after completion of 4 years of regular service – Procedure reg.

Ref: Board’s letter nos. E(GP)98/2/82 dated 09.12.98 and E(GP)2003/2/22 dated 16.06.2003 & 03.09.2004.
In terms of Ministry of Railways’ Notification No. PC-VII/2017/RSRP/1 dated 08.03.2018; the higher scale of Level 10 has to be operated to the extent of 100% of the Group ‘B’ officers on roll including Group ‘B’ officers officiating in Level 11 on ad hoc basis after completion of 4 years of regular service in the respective grades in Organised Departments.
2. In this regard a few references have been received from Zonal Railways wherein they have sought clarifications with regard to the procedure to be followed in the cases of pay fixation of officials working in Senior Scale adhoc, application of reservation rules, date of assessment of these vacancies etc. Accordingly, Board has decided to clarify that following procedure should be adopted for placement of these officers in the higher scale:
3. Procedure for placement of Group ‘B’ officers in the higher scale:

4. As the higher scale of Level-10 has now been extended to 100% of the Group ‘B’ officers on roll, reservation rules are not attracted.
5. Seniority for purpose of absorption in Group `A’/Junior Scale and ad hoc promotion to Senior Scale:
5.1 The Officers, even after their placement in higher scale of Level-10, will be classified as Group ‘B’ only.
5.2 For the purpose of promotion to Group ‘A’/Junior Scale, the placement of officers in the higher scale of Level-10 may not be given any weightage, as is the position in the case of Group ‘B’ officers who are placed in the Senior Scale of Level-11 on ad hoc basis. All the Group ‘B’ officers, whether in Level -8 (Level-9 in Accounts Department) or in Level-10 may be arranged in the order of their original seniority in Group ‘B’ for the purpose of consideration for promotion to Group ‘A’/Junior Scale or for promotion on ad hoc basis to Senior Scale. Similarly, the residency period should remain as per extant rules regarding non-fortuitous service in Group ‘B’ irrespective of whether the officer is in Level-8 (Level-9 in Accounts Department) or in Level-10.
6. The Non-functional upgradation shall be done on the same lines as brought out above with effect from the date of notification i.e. 08.03.2018 and thereafter w.e.f. 1st January and 1st July of subsequent years.
7. Further, for consideration of officers for placement in the higher Group `B’ scale of Level-10, the senior Group ‘B’ officer should be deemed to have rendered the service put in by his immediate junior, and if that happens to be 4 years or more, he should be considered for placement in the higher Group ‘B’ scale of Level-10.
8. Pay fixation on grant of Non-functional upgradation.
8.1 On grant of Non-functional upgradation in Level-10, Pay of Group ‘B’ officers, working in Level-8 and 9, shall be fixed as per provision of RS(RP) Rules, 2016. Illustration in this regard is enclosed as Annexure-I.
8.2 On grant of Non-functional upgradation in Level-10, pay of such Group ‘B’ officers already officiating in Level-11 shall be regulated as per illustration in this regard enclosed as Annexure-II.
8.3 Benefit of Rule 1313 I(a)(i) of R-II shall be applicable on grant of Non-functional upgradation. Date of annual increment shall be regulated by provisions of Rule 10 of RS(RP)Rules, 2016.
9. Necessary action may accordingly be taken urgently. Please acknowledge receipt.
(Meenakshi Saluja)
Dy. Director, ESTT. (GP)-III
Railway Board 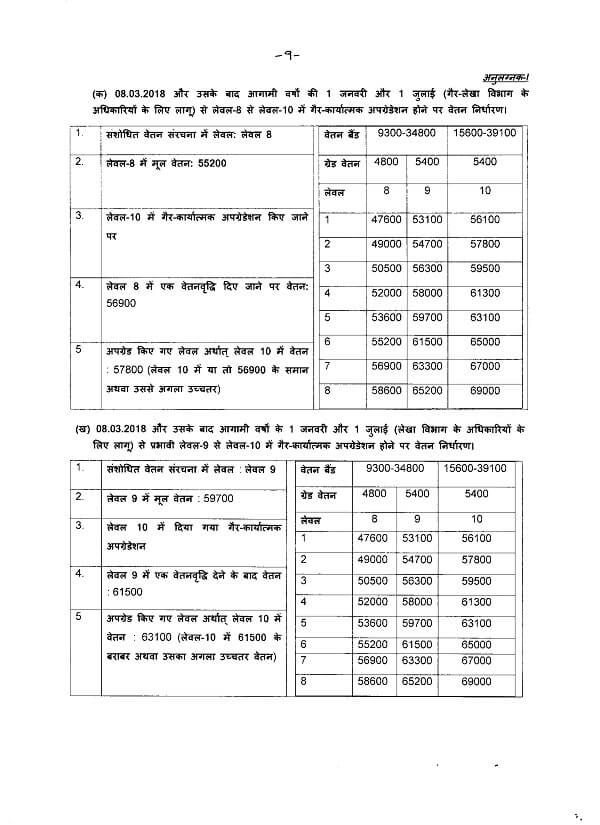 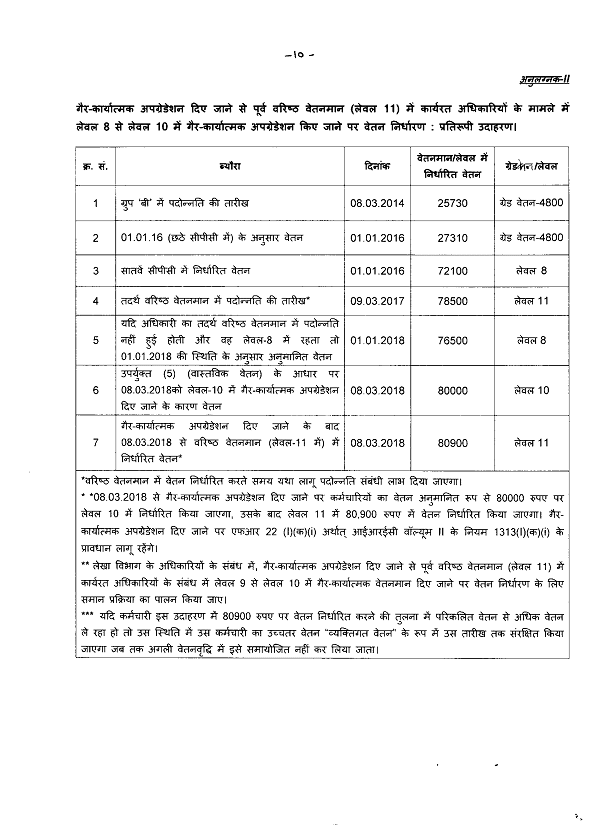