78 Shri Ravi Prakash Verma
Shri Neeraj Shekhar
Will the Minister of FINANCE be pleased to state :-
(a) whether Government proposes to raise the fitment factor under 7th Central Pay Commission (CPC) from 2.57 for intermediate and lower officials to 2.81 which has been implemented for senior officials under 7th CPC;
(b) if so, the details thereof;
(c) if not, the reasons therefor;
(d) whether Government would increase the HRA from 24 per cent to 30 per cent of basic salary as it was under 6th CPC in view of non-availability of rented accommodations within 24 per cent of basic salary in metro cities;
(e) if so, the details thereof; and

(f) if not, the reasons therefor?
ANSWER
MINISTER OF STATE IN THE MINISTRY OF FINANCE
(SHRI P. RADHAKRISHNAN)
(a) to (c): The fitment factor for the purpose of fixation of pay in the revised pay structure based on the recommendations of the 7th Central Pay Commission is 2.57 which is uniformly applicable to all categories of employees. As the same is based on the specific and considered recommendations of the 7th Central Pay Commission, no change therein is envisaged.
(d) to (f): The Government vide Resolution dated 6th July, 2017 decided that HRA shall be revised to 27%, 18% and 9% of Basic Pay in X, Y and Z cities when Dearness Allowance (DA) crosses 25% and further to 30%, 20% and 10% of Basic Pay in X,Y and Z cities when DA crosses 50%. 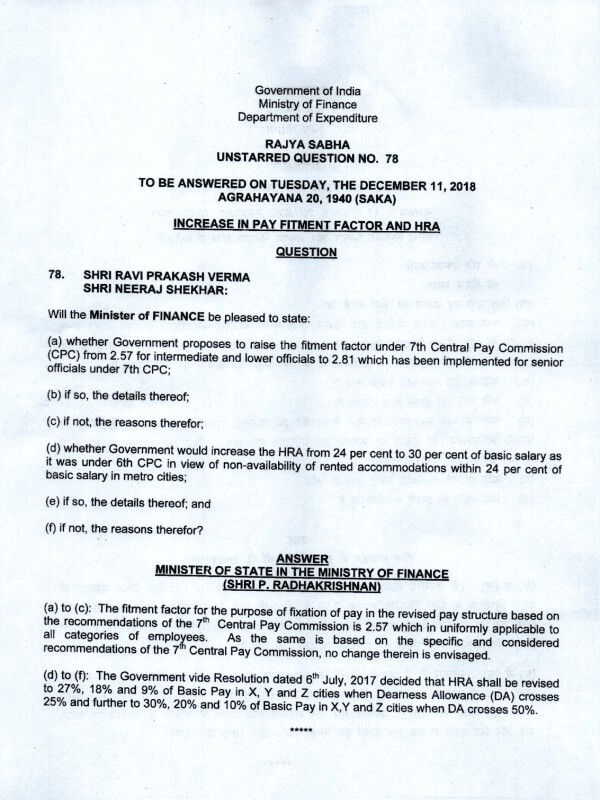