Keeping in view the difficulties being experienced by Zonal Railways due to vacant posts of Gazetted Officers and with reference to letter at (l) and (2) above, Board (MS, FC & CRB) have approved re-engagement of retired Senior Scale Officers against the Junior Scale vacant posts, as consultant in exigencies of the services, subject to the following conditions:
Officers retired from Senior Scale (not above Senior Scale) may be considered for re-engagement against the Junior Scale post, if willing to be re-engaged, on the same terms and conditions as issued for Re-engagement of retired Gazetted Officers in exigencies of services vide Railway Board’s letter No. 2018/Trans Cell/S&T/Contractual Staff Dated: 25.10.2018, except the remuneration.
Monthly remuneration of a retired Senior Scale Officers being re-engaged against the Junior Scale post be determined by reducing Pension from his/her last pay drawn (i.e. Basic Pay + DA) by the officer in Junior Scale/Group ‘B’ just before the promotion to Senior Scale minus the pension of the retired officer. In case the last working of the retired Senior Scale Officer, re-engaged, in Junior Scale/Group ‘B’ post, was during VI CPC, then the corresponding amount can be worked out by applying 2.57 fitment factor and notional placement in the corresponding pay scale to ascertain corresponding VII CPC pay.


This issues with the concurrence of Associate Finance of Transformation Cell of Railway Board. 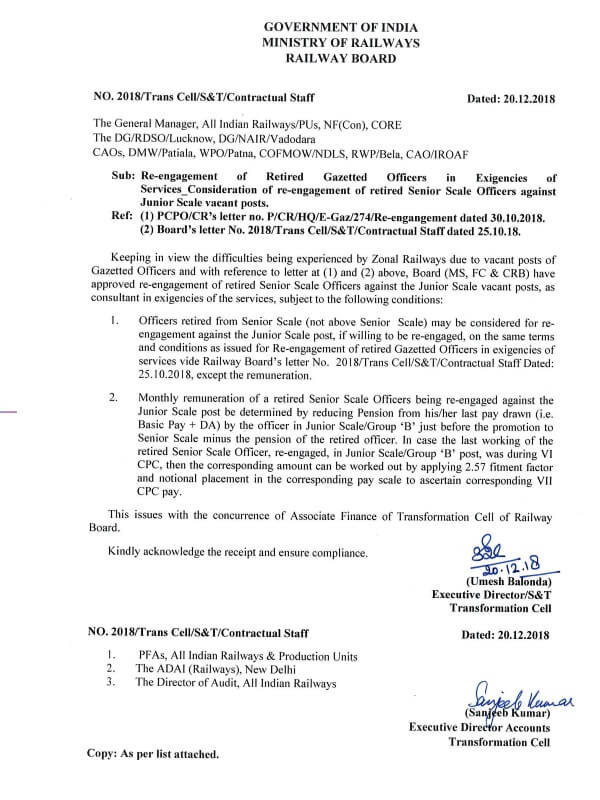