Kiran Kumari 0 January 22, 2019 3:02 am
MACP in 7th CPC – Applicability of benchmark ‘Very Good’ – ‘Good’ APAR prior to 25.07.2016 may be treated as ‘Very Good’ : Clarification & Illustration by SSB
Directorate General
Sashastra Seema Bal
East Block-V, R K Puram
New Delhi – 110066.
No. 1/Org/MACP/2018(186)/ 117
Dated: 10th Jan 2019
OFFICE MEMORANDUM
This is in reference to DoP&T OM F. No. 35034/3/2015-Estt.(D) dated 27/28.09.2016 regarding enhancement of Benchmark for financial up‑gradation under MACP Scheme as per recommendations of the 7th CPC accepted by the Government.
Of late, field units have been seeking clarification regarding the applicability of benchmark ‘Very Good’ for considering financial up-gradation under MACP Scheme. The matter has been examined at FHQ and the following clarifications are issued for compliance by all concerned:-
(i) For grant of financial up-gradation under the MACPS, the prescribed benchmark would be ‘Very Good’ for all the posts w.e.f. 25.07.2016.
(ii) APAR grading ‘Good’ for the period prior to 25.07.2016 i.e. the date from which the new Benchmark made applicable, may be treated as ‘Very Good’ while considering such cases by the Screening Committee/BOO.
(iii) There should be at least three ‘Very Good’ grading and other two not below ‘Good’ grading out of last five ACRs/APARs considering point (i) & (ii) in view for arriving at the prescribed Benchmark ‘Very Good’. Some illustrations are given in the enclosed Annexure-A for guidance. 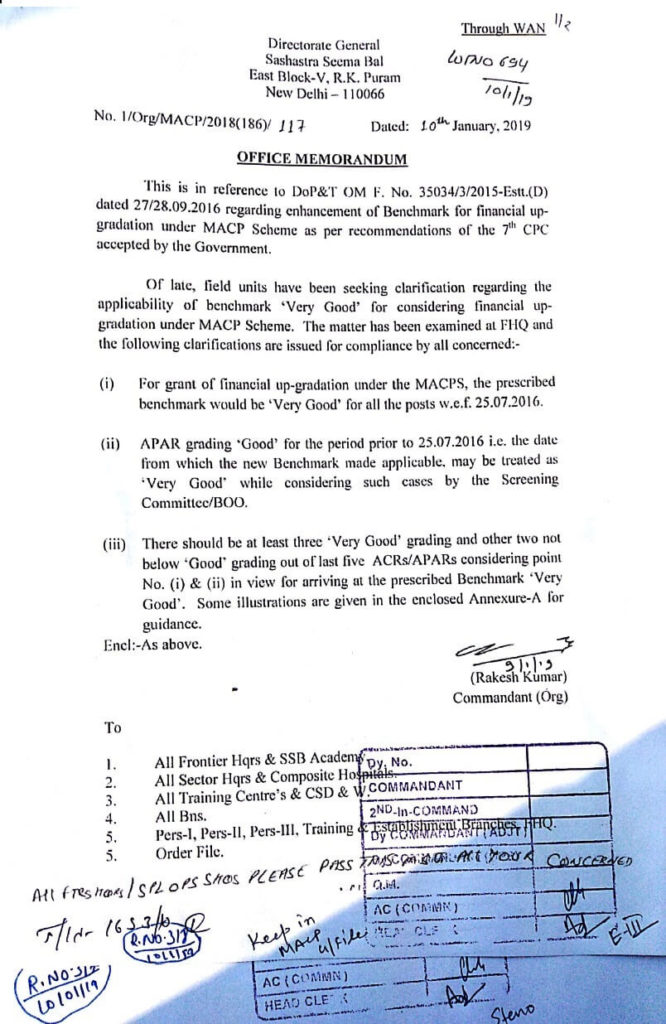 Jameel: Now my family pension 15365 how much Get increasing my pension