Ref: (i) GS/NFIR’s letter to Railway Board vide no.II/35/Part XIV dated 15-01-2018
(ii) Railway Board’s letter No.D-43/34/3017-F(E)III dated 24-01-2018
(iii) NFIR’s letter No.II/35/Part XIV dated 12-02-2018 & 26-02-2018 addressed to CRB.
(iv) NFIR’s PNM Agenda Item No.9 sent to Railway Board on 26-06-2018
(v) DoP&PW O.M.No.38/17/18-P&PW (A) dated 1st June 2018 to Railway Board.
(vi) Railway Board’s O.M.No.D-43/34/2017-F(E)III,dated 23-05-2018 & 16-08-2018 to Department of pension & Pensioners welfare Lok Nayak Bhawan, New delhi
(vii) NFIR’s letter No.II/35/2018 dated 19.09.2018 to Railway Boards.
Federation vide its letter dated 15-01-2018 provided to the Railway Board sample concordance tables for revision of pension cases of pre-01-01-2016 retired Running Staff. Railway Board vide letter dated 24-01-2018 have however issued instructions for revision of pension of pre-2016 retired Running Staff. The Federation vide its letter dated 26-02-2018 had pointed they be withdrawn as the same do not ensure correct revising of pension fixation of pre-2016 retired Running Staff. Federation also cited various provisions of DoP&PW and also those contained in IREM. Consequently, Railway Board vide O.M.dated 23-05-2018 sought clarification from DoP&PW to which the DoP&PW vide O.M.dated 01st June 2018 wanted few illustrations of the formulation so as to compare the pay/pension as on 01-01-2016 as per Railway Board’s instructions dated 24-01-2018 with pay and payable pension as suggested by our Unions.
Federation has come to know that the detailed information sought for by the DoP&PW has since been conveyed by the Railway Ministry vide OM dated 16-08-2018, but however progress in the matter is yet to be apprised to the Federation.
In this connection, NFIR also invites kind attention of the Railway Board to PNM Agenda item No.9 (sent to Railway Board on 26-06-2018) discussions on which are yet to take place. Federation however gives below additional points for consideration:-
NFIR, therefore, once again requests the Railway Board to furnish proper illustrations to the DoP&PW for obtaining clear clarification for arriving at actual entitled pension to the retired Running Staff. A copy of the reference made to the DoP&Pw may also be provided to the Federation.
Yours faithfully
(Dr.M.Raghavaiah)
General Secretary 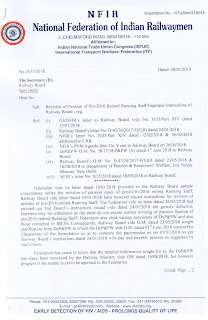 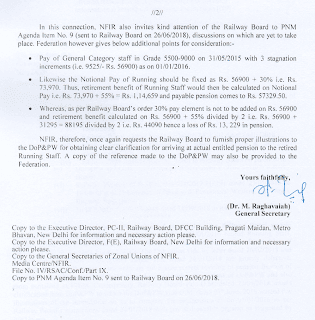